The Four Years Free program covers standard tuition and mandatory fees for eligible Oregon students, allowing them to graduate with as little debt as possible. Since the program began, 2,258 students have enrolled in Four Years Free. All applicants to PSU are automatically considered for Four Years Free — the program doesn’t require a separate application — making it a stress-free process for students who qualify.

Four Years Free has attracted students from across Oregon, with the majority coming from high schools in the Portland metro. The top high school is David Douglas, followed by Franklin, Madison, Aloha, Century and Reynolds.

For many Four Years Free students, the program was what made it possible for them to attend a four-year university straight out of high school.

Ash Helvey learned about the Four Years Free program from a high school advisor during the fall of his senior year. “I didn't know that there were any sort of programs like this,” he says. “I was really excited because I had planned to maybe go to community college, but the idea of going to university seemed very out of my ability. I didn't think it was something that I'd be able to do.”

Helvey says that because he came to PSU for his first year of college he was able to take advantage of volunteer and job opportunities right off the bat. His time at the Queer Resource Center stands out as a highlight of his PSU experience. “Being on campus and having that space was always so great,” he says. “I have lots of great memories of meeting and getting to spend time with people there.”

For Helvey, Four Years Free was a motivating force. “[College has] been very difficult for me, but there have been multiple times where I've just felt like, well I can't quit now when I have this great opportunity,” he says. “It's really kept me going, knowing that not many people get this kind of opportunity, and I don't want to waste it.”

“It’s so bizarre to me to think about graduating with my bachelor's degree without paying any debt. When I’m thinking about my future career, where I'll live in the future, all of these things, I won't have to worry about debt looming over me,” he says. “It just makes me feel incredibly lucky and privileged to have been able to have this opportunity  because I don't even know if I would have been able to get this far without it, if I’m being honest.”

While he’s excited to graduate, Helvey’s time at PSU might not be over. He’s considering one day coming back to PSU for a master’s degree in social work. “My community is something that's very important to me, so being able to work with other queer and trans individuals in any sort of form is something that I aspire to do — supporting my community the same way I have been supported all these years.”

For Cassidy Young, qualifying for Four Years Free helped her choose between PSU and the University of Portland, which didn’t offer her much aid. “Four Years Free gave me the opportunity to actually go to college without taking tons of loans, which I didn't really want to do,” says Young. “If I hadn't [received Four Years Free], then I probably wouldn't have gone to Portland State or maybe college in general, or I would have gone to a community college and then transferred over,” she says. “I'm glad I was able to go to a four year university.”

PSU also appealed to Young because of its strong business school since she knew from the start that she wanted to major in accounting. During her years in the accounting program, Young took advantage of PSU’s Beta Alpha Psi Honors chapter, which helps accounting students build their professional skills and make connections with accounting firms.

“Accounting firms from all over the Portland area come, and you can meet with them and talk with them,” says Young. “I did that a few times and I got my name out there.” Young says the School of Business also helped her prepare for interviews.

Young’s networking and interview practice paid off. In January, she’ll be starting as tax staff at the accounting firm Moss Adams in downtown Portland.

“I’m looking forward to that for sure,” she says.

“I was really honored to receive it,” Julia Misenhimer says about her Four Years Free support. “It just made me feel a lot better because my family isn't able to support me financially for college. It took a lot of that burden off of what I feel my dad was feeling and definitely off of myself too.”

Misenhimer especially appreciated that she was automatically considered for the Four Years Free program. “There are no hoops to jump through to apply for it,” she says. “Just like PSU, it's very welcoming for all different kinds of people from all walks of life.”

Misenhimer entered PSU knowing she wanted to study science and ended up majoring in biology. “I was meant to be in science, I think, because I wanted to learn about the complexities of the world,” she says. When she took the course Genes and Society with Dr. Lisa Weasel she was met with a bigger appreciation of her work and the work of Dr. Erin Shortlidge and decided to pursue a minor in Women's Studies. “The physical, natural complexities to the world, they also intertwine and correlate with a lot of our social issues,” she says. Misenhimer is thinking about a future in teaching or research  — or even combining both.

For Misenhimer, graduating doesn’t feel like she’s leaving PSU. “I feel like as a PSU alumni, I still will have access to some things that I will need and I will be able to maybe give back to the school in different ways down the road,“ she says. “I feel like I will always have a part of PSU.” 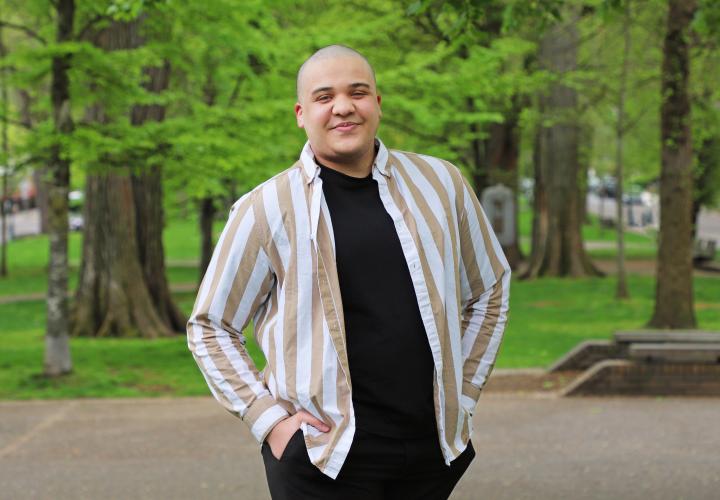 Kaelib is a senior studying Japanese language with a minor in Communication Studies. He was awarded the Four Years Free tuition program to complete his Bachelor’s degree. Learn about Kaelib's Four Year's Free story.