Code for success with a computer science degree

Get your computer science degree

After she graduated from high school, Aleena Watson wasn’t sure what she wanted to do for a career. She took a job at a pain management clinic and soon found herself helping coworkers with the clinic’s electronic medical record (EMR) system, delving deeper and deeper into how the EMR system worked. One day her boss suggested that she consider studying computer science.

“I didn't even really know what computer science was,” she says. But when she learned more about the field, she felt a spark. And she started looking at colleges.

Researching computer science programs was important to Aleena. She wanted to get her money’s worth. “I paid for college myself so I wanted to know what I was paying before I got there,” says Aleena.

During her search, Aleena happened to visit Portland State University while on a trip to attend a friend’s wedding. She was pleasantly surprised at PSU’s computer science offerings.

When Aleena visited a university in California, she was put off when nobody said hi to her. Her experience with PSU was the exact opposite. “I went to the Portland State orientation in California, and I instantly made friends with people at my table,” she says.

She decided to attend PSU and graduated with a double major in computer science and math in 2019. Aleena now works at Adobe as a full-stack engineer on the Enterprise Technology Lab team.

Computer science is one of PSU’s most popular programs. Over the past 10 years, the number of computer science majors at PSU has increased by around 8% per year and for good reason. Students like Aleena who major in computer science are taking the first important step toward gaining the technical skills and community connections that can help them land good paying jobs—in just about any industry.

A computer science degree program built for you

PSU’s computer science program offers a robust slate of courses relevant to today’s employers as well as the ability to specialize in popular emerging fields in tech, like cloud computing, computer vision, machine learning and cybersecurity. Many courses are offered online or at night so students who are working or caring for children can fit them into their schedules. The courses are designed to give students a solid foundation on the fundamentals of computer science.

“I think what set me up for success at Portland State was the rigor of the program,” says Aleena.

Aleena credits learning the programming language C++, a requirement for computer science majors at PSU, as giving her an advantage when interviewing for jobs. She noticed most of the other interviewees didn’t know the language.

“[Employers] automatically know that if you know C++, everything's going to fall into line,” says Aleena. “They have a lot more confidence in what you're doing because they know that C++, in and of itself, is rigorous.”

Even with supportive and talented faculty, computer science courses can be challenging. Aleena says she frequently visited with her professors during office hours and also benefited tremendously from studying with friends and getting involved with Scholars for Success in STEM (S3).

S3 is a support network that provides academic workshops, peer mentoring and career development opportunities for historically underrepresented students pursuing an undergraduate degree in engineering or computer science. “The S3 group is something that was super foundational for me,” she says. “It gave me my first few friends.” Another student group, We in Computer Science (WiCS), also provides networking and support for communities historically underrepresented in computer science.

Portland State is nestled right in the heart of “Silicon Forest,” a robust cluster of tech companies, including Intel, Tektronix, AWS Elemental, Tripwire, Puppet and dozens more. Students in PSU’s computer science program make connections with these companies through internships and capstone projects.

“Capstones and internships can really differentiate you from everyone else in terms of being hired,” says Wu-chi Feng, professor of computer science and associate dean of research at PSU. “The company gets to test you out and you get to test the company out and see if there’s a match.”

Aleena completed two internships during her time at PSU—one at Portland tech startup Cozy and the other at eBay. At eBay, Aleena worked with the payments team on a challenging project. “They literally told me, ‘we think that you can do this, we know the education that you're getting at PSU,’” she says. “Local companies, they know that the students coming out of Portland State are exceptional.”

Of last year’s computer science graduates, 75% completed an internship during their time at PSU. While some students find their own internships, others apply through the department’s two paid internship programs: Multiple Engineering Cooperative Program (MECOP) and the PSU/PDX Cooperative Education Program (PCEP).

Capstone projects, in which teams of four students spend two quarters designing a solution for the needs of a local nonprofit or company, also help connect students with potential employers. Along the way they gain valuable work experience.

“Being able to really immerse yourself into that work, I think is just as good as getting an internship,” says Aleena. Aleena’s capstone project involved building a Slack integration tool for the local software company Jama. “Whatever you put into it, you’re going to get out of it,” she says.

The prospects for students majoring in computer science are bright. Of PSU computer science majors who graduated last year, 80% are employed or in graduate school, despite the pandemic, and they report an average salary of $73,000. What’s more, both of these numbers are likely to grow. According to the Bureau of Labor Statistics, the demand for software developers is expected to increase 22% from 2019 to 2029.

Career options go far beyond the stereotype of the lone wolf coder typing away in a cubicle. Many computer science jobs are collaborative and involve working with a team to solve a problem.

“For a lot of people, computing is actually going out and talking to people, figuring out what they need and working with a team to design and deliver it,” says Feng.

Take Aleena, for example. She works with a team of 19 at Adobe to build innovative solutions for clients like Nike and Chase. “We try to make our biggest customers’ headaches go away,” she says.

Because tech is such a pervasive component of the modern world and computer science skills are in such demand, Feng notes that a computer science degree can be combined with a passion in just about anything—medicine, music, sports, etc.—to create an interesting and rewarding career. “The great thing is just the diversity of what you can do,” says Feng.

While Aleena says studying computer science at PSU was at times very challenging, her love for the subject and the doors her degree opened made it worth it. “I knew that this was a good path for me because I could get a job afterward and in the process I was having fun,” says Aleena. 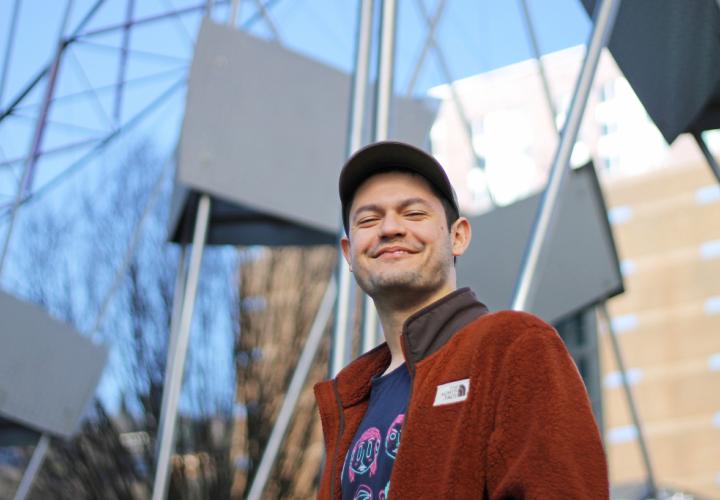 If you’re a current or prospective computer science student, you may have heard of We in Computer Science, more commonly known as WiCS, one of PSU’s student-led computer science groups. But do you know much about the group’s goals or what it offers for CS students?

We in Computer Science at PSU

The CAT (Computer Action Team) is a hands-on, IT training program for student volunteers. PSU’s University Communications spoke to the CAT’s Department Manager, Brittaney Califf, and Communications Student, Brian Koehler to find out more about the opportunities CAT provides for students.