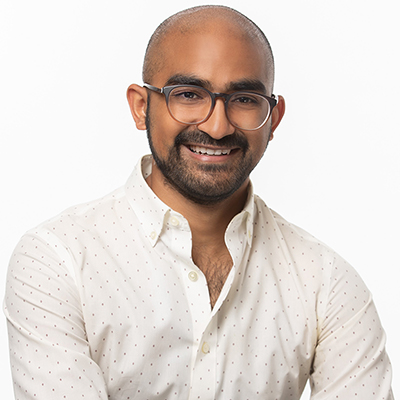 Arsh Haque is a national-award-winning founder, coach, and storyteller. They have founded four startups (which top accelerators including Techstars and Coca Cola have welcomed into their programs), built master's-level courses, taught alongside instructors from Stanford's d.school, and coached thought leaders on how to deliver talks at TED. Haque holds a JD from the University of Southern California and a Master of Public Policy from the Paris Institute of Political Studies. They also have extensive experience in DEI rooted in formal academic study and practice and lived experience. They began their role as Director of the Portland State Business Accelerator on August 23, 2021.

Describe your background and experience?

AH: When I think about the path that brought me here, I'd say the focus of much of my work so far has been on building capacity and I am now transitioning to focusing more on execution. Up until now in my career, it was all about reaching out to explore possibilities and discover all the exciting things I could do. So whether that was teaching students or developing curricula for graduate courses on social entrepreneurship, forming an education non-profit to connect language learners in the US and Guatemala, studying economic development in Paris, France, or being a founder in the tech industry. The common thread is that I'm passionate about learning new things and being a part of exciting stories. The opportunity to step in as the director of the PSBA is one that I think suits the skills and strengths I've developed throughout my career in a way where I can now support others going on those journeys.

What attracted you to the PSBA?

AH: I think the variety of companies had a lot to do with it. I've had a lot of exposure to building different products and pursuing different ideas in my career. I've always been interested in tinkering with things. Of all my startups, the one I was most excited about started with a friend in a basement where we disassembled a TENS machine and got this idea to hack nerves. The companies in the PSBA remind me of that work. Their ideas are exciting and cutting-edge. They're not something anyone else is doing. At the PSBA, there's a lot of folks rooted in materials sciences and hardware. You have magnetic gear companies, bismuth materials companies. Getting to work with people who work with their hands that way was an exciting prospect and one of the things that drew me to the PSBA.

What do you bring to the table as director of the PSBA?

AH: I have a background in scaling startups like those in residence at the PSBA. Applying processes of KRs, KPIs, scrums, and agile is something that excites me—so bringing that to the table and formalizing what the PSBA is already doing and taking it to the next level. And then, there's the capacity for building upon the PSBA's diversity, equity, and inclusion work. There have been many discussions around startups and accelerators where equity and inclusion play a role, but there's still a lot of room for improvement. I have the lived experience of an entrepreneur with an intersectional identity. I've studied critical race theory and Rawlsian economics. And I have a lot of practical experience in building curriculums around DEI executive coaching and seeing the results in action. I'm excited to bring that experience to the PSBA.

What have you found interesting about the entrepreneurial ecosystem in Portland?

AH: For one, the university spinout and NSF scenes in Portland are strong. There are a lot of scientist-entrepreneurs here that excel at attracting those funds. And the community here is excellent at helping those folks cross the chasm from scientist to entrepreneur and build out and commercialize solutions that are not only conceptually interesting but substantively impactful. That strong sense of community is also something I think is in Portland's favor. In any ecosystem, you have predators and competing factions. While that does breathe a lot of life in companies and startups, it often comes at the cost of feeling like you’re in a community. But Portland has that sense of community. People are willing to talk to each other, even if they're in overlapping industries. They're willing to share insights and grow together. Then there are organizations like Oregon Bio, ONAMI, and Business Oregon that support the regional ecosystem. That sense of community sets Portland apart. It will be interesting to see how we can tap into those resources more deeply and intentionally.

Portland is between the West Coast's two major tech hubs, Silicon Valley and Seattle. How does our location impact the city's entrepreneurial ecosystem?

AH: I've talked a lot with CEOs about re-centering the conversation about entrepreneurial ecosystems on a national level. There's this idea of success based on the success of companies in regions like Silicon Valley and Seattle. So this idea of a robust ecosystem being one in which companies go from ideation to IPO. But if you look through a national lens, I think regions can have their specialty. Some cities might be great at the ideation to MVP stage. Others might have their strengths at other stages in the pipeline. Being positioned between two large, well-funded cities plays into Portland's strengths. We have those creatives and tinkerers that are building solutions no one had imagined before. They're great at taking ideas to the product stage. That's where we fit into the West Coast ecosystem. We turn ideas into products. When the need arises for large funnels of talent or funding to break into that next stage, we can go north or south and find teams that have done that transition well, and in that way we can all scale up together.

Related Links:
Return to all news