Via virtual events, students are driving the conversation for a better future

Our Time is Now

On October 22 and 29, TEDx Portland State University is hosting a diverse roster of speakers presenting on the theme, Our Time is Now.

“Our main goal is to spread ideas and to build communities,” says Sasheen Turner, who organized the event alongside lead organizer Cheyenne delaCruz.

Turner, who graduated from PSU in March with a degree in business and advertising management, said this year’s prescient theme was actually selected in 2019. When she and delaCruz realized their event would have to be held virtually, they questioned whether to postpone it.

“We realized what better time than to have it this year?” says Turner. “Our time is now . . . the theme really pushed us forward.”

Turner and delaCruz have worked with the speakers to develop their talks around the theme. “They've taken our prompt, and they put it on stilts," says Turner. “They're all talking about something different, but it all pertains to moving forward.”

In one talk, Gio Tayetto, a graduate of PSU’s School of Business, will discuss how showing vulnerability can build strong, lasting connections.

Jennifer Tenorio, a former Border Patrol agent, will give a particularly timely presentation about intervening in escalated situations, such as those involving civilians and police.

“I'm definitely excited for that talk,” says Turner. “I feel like it's also going to be conversation provoking.” 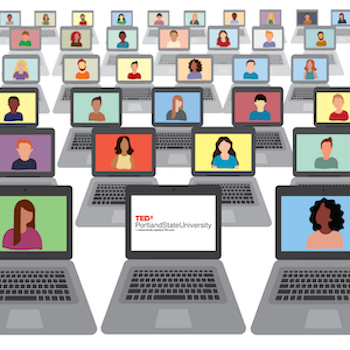 Another timely talk by PSU student Nya Mbock will focus on how students are managing during the pandemic and give information about how to stay motivated during this challenging time.

“I'm a recent grad; I graduated in March. It was very, very stressful for me,” says Turner. “[Mbock] serves her personal experience, and I feel that it'll resonate with a lot of students.”

Turner hopes that students will leave the conference ready to take action. “For students who watch this, I want them to come out of the event feeling motivated,” says Turner. “Not every speaker has a call to action, but for the ones that do, I hope that they engage with those calls to action.”

On October 30, the entire PSU community will engage in the Equity Summit, a day of collective visioning and planning about the future of diversity, equity and inclusion at Portland State led by President Stephen Percy and Ame Lambert, PSU’s new Vice President of Global Diversity and Inclusion.

The Associated Students of Portland State University (ASPSU) is a partner in the event and hopes to encourage as many students as possible to register and have their voices heard.

“We’re inviting students to the table at this virtual event,” says Victor Chavez-Gonzales, vice president of ASPSU. “This is an opportunity to get to sit down with administrators, with campus leaders, with other students on campus to discuss how we can create a more equitable PSU for a long time, rather than just for the time being.”

Chavez-Gonzales says the Equity Summit is part of ASPSU’s ongoing work for racial justice. For example, he is working with the Oregon Student Association to lobby for legislation that supports equity for people of color not only at PSU but statewide.

The goal of the Summit is to spur meaningful changes to support individuals and communities of color at Portland State. According to Chavez-Gonzales, it’s key that students are intimately involved in these changes, especially when Portland is in the national spotlight due to mass protests against systemic racism.

“Portland, Oregon is getting name dropped by the President of the United States and that really never happens,” says Chavez-Gonzales. “Portland State is just such a unique campus, and we want to show that we can prosper, that we can be resilient as students. It's a campus for students who want to take action for themselves. These are definitely times where we should all be envisioning what PSU should look like in the later future.”

Chavez-Gonzales encourages students who haven’t yet to consider registering for the Equity Summit: “If you care about having a say about what happens on your campus, then you should definitely come and help us — with your own voice, with your own opinion — create a just and equitable PSU.”