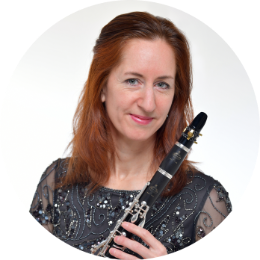 A devoted educator, clarinetist Dr. Barbara Heilmair engages communities as a clarinet professor, performer, and teaching artist. She serves as Associate Professor of Clarinet & Music at the Portland State University School of Music as well as Associate Dean for the College of the Arts.

She has given masterclasses and presentations at the University of Melbourne and the Monash University in Melbourne/ Australia, the Musikhochschule in Munich/ Germany, the College Music Society’s Regional Conference in Vancouver/ B.C., the ICA ClarinetFest in Madrid/ Spain, or the Lourès Clarinet Academy in Lourès/ Portugal, in addition to ongoing collaboration with other clarinet studios and schools in the U.S.

Dr. Heilmair has specialized in the field of Clarinet Choir and in the research of underrepresented composers. In 2017, she co-founded the Zephyr Clarinet Choir in Portland, Oregon. Under her baton, the group has participated in the “Colossal Clarinet Choir” event during the 2019 “Chamber Music Northwest Clarinet Celebration” and has been featured in All Classical Portland’s radio show “Played in Oregon” (89.9 FM). Curating and promoting Austrian composer Franz Cibulka’s musical heritage, Heilmair has premiered several of his works and has published a new edition of his “Claroness” (Jeanné, 2019). Her research has been published in the “Clarinet”, “Clarinet & Saxophone”, and “NACWPI Journal” magazines.

She holds degrees in Clarinet Performance and in Instrumental Pedagogy from the University of Music and Performing Arts "Mozarteum" in Salzburg, along with M.M. and D.M.A. degrees from UCLA.