A new Portland State University study suggests that universities should do more to invest in training graduate students in 21st century teaching methods, and that doing so does not mean that they would be any less prepared for a career in research. 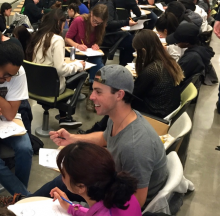 In fact, the study found that Ph.D. students who are trained in evidence-based teaching — methods that emphasize interactive, collaborative and hands-on learning rather than just traditional lecture — can be just as competitive of researchers, if not better, than those who are not.

The authors found there was a positive relationship between increased training in evidence-based teaching and students' confidence in their preparedness for a research career, their ability to communicate their research and their research productivity, as measured by the number of papers they publish.

The findings run counter to a widespread perception that any time spent teaching, or even learning about teaching methods, will take away from research productivity for faculty and graduate students.

But Shortlidge said that amid a national push for universities to do a better job of teaching science, technology, engineering and math (STEM), it's critical that graduate students — who as future faculty members will likely be required to teach — learn effective teaching methods.

Evidence-based teaching can include the use of interactive tools such as clickers, small-group discussions and course-based undergraduate research experiences.

The study surveyed 338 students who were at least in their second year of a Ph.D. program in the life sciences, the STEM discipline that consistently awards the greatest number of doctorate degrees.

Shortlidge said that oftentimes graduate students who do participate in professional development opportunities in teaching have to seek them out on their own, with few receiving substantial training in student-centered teaching methods.

"There doesn't seem to be evidence that if universities invest in training graduate students in 21st century teaching methods, they're going to be harming their productivity; if anything, they could be benefiting them," Shortlidge said. "Graduate students can shift the paradigm moving forward, and take on this national push to be a better teacher as well as a cutting-edge researcher."