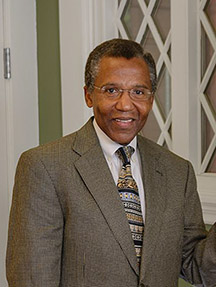 Leroy E. Bynum, Jr. — an accomplished opera singer and dean at The College of Saint Rose in Albany, NY — has been named the new dean of Portland State University’s College of the Arts.

Bynum will begin at PSU this summer. He replaces former dean Robert Bucker, who retired in January.

Throughout his professional career, Bynum has remained active as a performing artist, appearing in operatic roles, as a featured soloist and in solo recitals throughout the United States, Europe and South America. He also has maintained a voice studio for aspiring performers and teachers.

Bynum said PSU’s stellar opera program immediately caught his attention, and he was also impressed by the rest of what the college has to offer.

“My mind was completely blown by the caliber and sheer volume of creative works and imaginative initiatives the College produces and accomplishes each year,” he said. “I am honored and thrilled beyond measure to have been extended this opportunity to join the vibrant and impressive community of artists and scholars at Portland State.”

“We are so fortunate to have Leroy join the College of the Arts and the PSU leadership team,” said Sona Andrews, PSU’s provost and vice president for academic affairs. “His experience and passion for education and engagement will be a great asset to our students, faculty, staff and community.”