As the saying goes, history repeats itself, and a quarantine station in Knappton Cove, Washington, sits at the mouth of the Columbia River across from Astoria, Oregon, as a reminder that this region had to manage infectious diseases long before COVID-19 arrived. 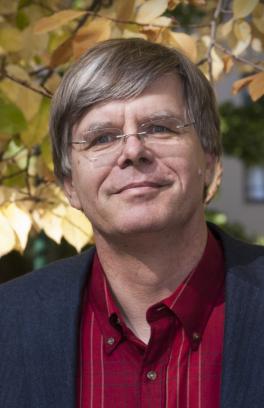 PSU history professor Friedrich Schuler's timely new book, A Shield for the Columbia River, offers the stories behind the founding of the Columbia River Quarantine Station. It took nearly 80 years, from 1820 to 1899, to convince Washington, D.C. policymakers to afford the Northwest the same federal protection as San Francisco and Seattle — a science-based institution to shield human and animal life from the pandemics of plague, cholera and other hostile viruses — allowing for the continuation of multicultural economic pursuits along the Columbia River.

We asked Schuler about the significance of the quarantine station in our region's history.

Q. What led to its founding?

Schuler: A global cholera epidemic in 1892 motivated officials to reorganize how to deal with global diseases arriving at our shores. As the first age of globalization took off, it was decided to establish several administrative rings around the country intending to keep smallpox, leprosy, the plague and other dangerous diseases out. Always the focus would be on the health of passengers, crews and immigrants traveling to our country. From 1892 on, federal U.S. health officers were relocated to ports abroad — for example Canton, China; Rio de Janeiro, Brazil; Bremen, Germany; or Liverpool, England — to make sure dangerous diseases would not even get on the boat.

The federal government established a second ring of protection designed to find, house and heal those few dangerously ill people the original health examination on the other side of the Pacific or Atlantic had missed. Those few who showed illness only after the ship had left the port were then put into stations in the U.S. to be quarantined.

It took until 1899 to convince Washington lawmakers to fund a federal quarantine station at the mouth of the Columbia. Passengers and immigrants that needed quarantine no longer had to sail to Port Townsend or San Francisco, saving companies close to $10,000 per incident.

Q. A 1921 article in The Sunday Oregonian called the facility "the 'Ellis Island' for this district." What was its role and significance for immigrants?

Schuler: Mass passenger travel to Astoria did not exist, but for the hundreds who came between 1899 and the 1930s every year, the Knappton Cove Quarantine station was their "Ellis Island moment."

The United States Public Health Service focused on the health of arriving people, not the enforcement of racist exclusion laws. Astorian leaders understood that their economic well-being depended on the availability of labor imports and made efforts to treat many in a differentiated way that served their economic priorities. Doctors and nurses at the station insisted on principled health equity already 120 years ago, no matter what popular or political culture wanted them to do.

The health officers also succeeded at keeping the focus on disease as a question of science, not one of discrimination based on appearance. This office’s paperwork accompanied thousands of Japanese immigrants into Oregon. Today, it tells us movingly their town of origin and profession before they sailed on to start a new life in Portland or Hood River.

To a smaller degree, the bills of health coming across the desk of the Knappton Cove Quarantine Station tell us about early trade between Oregon and Latin America. Here we find the voices of professionals from Callao, Peru; Antofagasta, Chile; and Manzanilla, Mexico.

Q. As we work through our current pandemic, what lessons can we learn from the past?

Schuler: We will always live in a natural world that will always bring new pandemics. The Knappton Cove Heritage Site keeps the importance of public health in the public’s eye so that key lessons do not have to be reinvented during the next pandemic – which will come for sure.

Since the Italians came up with the method of quarantine more than 500 years ago, quarantine has remained a true and tested method. Inside the station, the exhibit shows the Dr. Faucis of the last century. Their accomplishments implore us to stick to a practice based on science.

Learning about the history of the U.S. Public Health Service is essential to understanding the constant need for disease control and vigilance.

A few years ago, we had the privilege of a visit from Asst. Surgeon General Patrick O'Carroll.  Then, he asked the citizens of the Northwest to remember: "Quarantine is something we should never forget!" What happens across Astoria is part of a global effort. And a visit to the last remaining PHS lazaretto/pesthouse from this era is an inspiring experience to remember and pass on this lesson and its history.

Q. How did you get interested in this topic?

Schuler: Usually I research the international relations of Mexico. In order to have a break and to keep learning and because I am an immigrant and citizen myself, just like the men and women who had their papers stamped on Astoria’s wharf and Knappton Cove Quarantine Station, it felt only natural for me to help preserve this magnificent history.

Nancy Anderson and her daughter Heather Henry are so inspiring how they brought the U.S.’ only surviving lazaretto from the edge of extinction. The Anderson and Henry families, strengthened by the members of our board, are a model for what can be a self-sustained history experience and story preservation coming out of the community.

My book is an invitation to drive to Astoria, cross the Megler bridge and head east for a few miles to the lazaretto to take in an authentic "history where it happened" onsite experience.

Schuler's book is available on Amazon. For more information about the Knappton Cove Heritage Center and the Columbia River Quarantine Station, visit http://www.knapptoncoveheritagecenter.org.