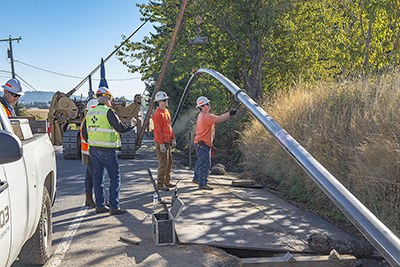 A new study by Portland State University’s Center for Public Service, conducted in partnership with NW Natural, finds that the regional natural gas system could provide a transportation sector backup that would be helpful for post-disaster recovery plans.

Vulnerabilities in the region’s liquid fuel supplies in the face of a major earthquake were highlighted in the Oregon Resilience Plan, a document prepared for the Oregon Legislature, along with the probability of an extended disruption to the electrical grid. The PSU study found that the use of compressed natural gas could prove more resilient after such a disaster because of the distributed and inherently protected nature of the NW Natural system of natural gas lines and renewable natural gas production potential throughout the region.

The study examined the capabilities of compressed and renewable natural gas as it related to the transportation system. In addition, PSU’s Northwest Economic Research center examined the value and costs associated with decentralized fuel systems, the state of fuel diversity in Oregon, and the costs and benefits of vehicles that run on compressed natural gas.

“What we found that was that the natural gas system is distributed both in terms of generation and storage, making a strong case for it be evaluated as a low-cost, low-risk system,” said Hal Nelson, assistant professor of public administration at Portland State and the faculty adviser on the study. “This is a new way of thinking about post-disaster infrastructure.”

Some 90 percent of liquid fuel consumed in Oregon enters the state by pipeline or ship and is stored in tanks in Portland’s Northwest industrial district. Researchers say transportation to and from the site would be compromised by a Cascadia Subduction Zone earthquake, raising the need for alternative transportation fuel sources.

“We understand that in the past, some have viewed the natural gas system as a potential liability in an earthquake because of older, legacy pipe materials. However, our pipeline network is among the most modern in the country,” said Jon Huddleston, NW Natural vice president of Engineering and Utility Operations. “The PSU study shows the importance of having energy system diversification to help our communities function and recover faster should a natural disaster occur, meaning NW Natural’s system can offer additional resiliency benefits to our cities.”

The study also determined that the natural gas and renewable natural gas system provides the potential for grid-scale storage and energy generation, including building upon the almost 3,000 generators already in place that could be used in the case of an extensive grid power outage following a natural disaster.

Authors of the study recommended several policy actions, program updates and areas for further study including recommendations for the development of compressed natural gas transportation fleets, designs for fueling hubs that could withstand natural disasters, and studying the use and design of natural gas generators. Coupled with the significant air quality and greenhouse gas reduction benefits associated with natural gas vehicles, these resilience advantages make the technology even more attractive than higher carbon, liquid fuels.