On Mondays and Fridays, Izzy Villagomez, one of several dozen speech-language graduate students completing clinical training, has therapy sessions with her clients via video chat. She and another student work with three adults: two who have had strokes and struggle with memory, reading and writing, and another who has a severe voice tremor. On other days, she assesses and diagnoses virtual clients as part of a simulated training program.

It's not how Villagomez expected to finish her final term in Portland State's Speech & Hearing Sciences master's program. This spring, she would have been interning at Doernbecher Children's Hospital, but she's grateful that the department switched all of its clinical services to telepractice to allow her and her peers to meet their 400-hour requirement necessary for graduation and licensure as speech-language pathologists.

"Telepractice isn't ideal, but I'm just thankful that we have a department honed in on its students and wants us to graduate on time and be ready for the workplace," Villagomez said.

Elsewhere in the country, speech-language pathology programs have put clinical training on hold and told students that they'll have to extend their programs by one or two semesters. But PSU never considered that an option.

The transition to telepractice was successful, in large part, because of the expertise of Megann McGill, an assistant professor in Speech & Hearing Sciences whose lab, which focuses on stuttering, has been exploring telepractice for speech therapy services.

For the past three years, telepractice has allowed McGill and her students to serve clients in rural parts of Oregon, where fewer options exist for therapy. But when the COVID-19 pandemic response meant that neither clients nor students would be able to come to campus for face-to-face sessions, McGill trained all of the graduate students and faculty on telepractice services.

As a result, the clinic has not had to abandon a single client. In fact, with the addition of four adjuncts who are serving as clinical supervisors, they have been able to expand their caseloads and serve people who had been on the waiting list. In total, the clinic is providing speech and language services to 54 adult and pediatric clients.

"In the COVID-19 crisis, we have found an opportunity to innovate and deepen our commitment to serving the community and families in need," said Claudia Meyer, director of clinical education at the Oregon Scottish Rite Speech and Language Clinic at PSU.

It also means that the roughly 40 second-year graduate students in the speech and hearing program remain on track to graduate in June. In the first year, students rotate through faculty-run clinics — often on campus, though sometimes at skilled nursing homes or public schools. In the second year, students are placed in externships in the community, including Portland Public Schools, Oregon Health & Science University, private practices, early childhood intervention programs, and home health agencies.

Now, students are using Zoom video conferencing to conduct teletherapy sessions from their homes. With the whiteboard and screen sharing functions, they can share videos, games or other therapy materials with their clients, while the chat feature allows them to get real-time feedback from their supervisors, who are muted and have their videos turned off. 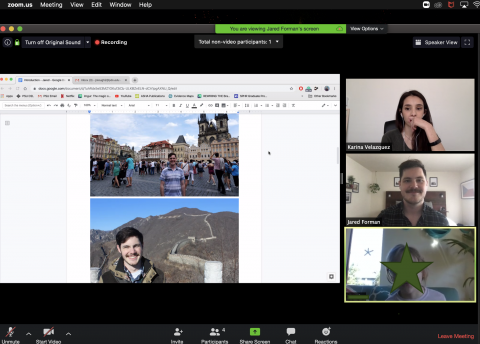 It hasn't been without its hiccups, though. Villagomez says a client had trouble connecting with audio for 25 minutes and eventually had to call in. Sometimes they have to deal with unstable Wi-Fi connections, bad audio feedback, or have to ask the client to move to a quieter or brighter room. But Meyer says that even the youngest clients are adapting and finding the new format motivating. She says the gratitude that families have expressed has been overwhelming.

For students like Villagomez who needed to clock in more hours to reach 400, the department has supplemented the teletherapy sessions with clinical simulation training. Using a tool called Simucase, students assess, complete diagnostic findings, make recommendations and provide intervention for virtual patients. They then meet as a class to debrief.

Villagomez says the telepractice and Simucase combined with what she learned during her externship at Scotts Elementary School in winter term is preparing her for her future job. She has a job offer at a school district for August, and is grateful she'll be graduating on time.

"You hope and expect to finish in two years," she said. "Even though doing Zoom all day can be tiring, I'm thankful my department has made it work."

The department's experience will also be invaluable in furthering McGill's research.

"I knew someday that we could get to a place where telehealth was more accessible to folks. I never imagined that it would be forced upon us like this," said McGill, who has also conducted a webinar training for the 80-plus speech-language pathologists in PPS to help them make the transition. "Telepractice doesn't work for every client, so we're in a unique position to train our students about which clients are appropriate for telepractice and how to train them in remote service delivery. It's something that will continue past this pandemic and increasingly allow people to access services from remote areas."