With e-scooters returning to Portland as early as April 26, Jennifer Dill is thinking about the gender gap.

Dill, director of Portland State University's Transportation Research and Education Center, analyzed data from the last time Portland had a plethora of e-scooters on its city streets — between July and November 2018 — and confirmed what she already speculated. There’s a gender gap when it comes to e-scooter riders. And it’s not that different from what Dill has discovered about the cyclist gender gap. 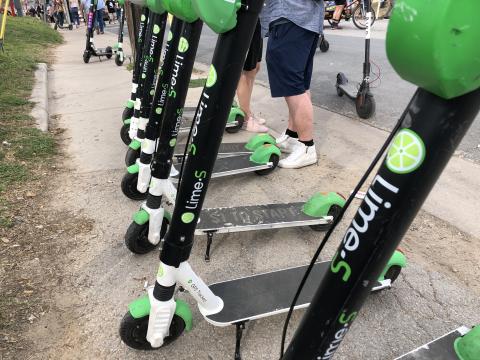 The Portland Bureau of Transportation surveyed 75,000 riders to help make future decisions about a long-term scooter presence in the Rose City last year. More than 4,500 riders responded. Dill said it’s impossible to know if the sample is representative, but what the data shows is worth considering.

“The pilot demonstrated that e-scooters may be a great mobility option for many people,” Dill said. “They appear to be attracting riders who are as racially and economically diverse as the city's population, though men and younger adults are definitely riding more.”

Based on PBOT’s survey, only 34 percent of users were women and 2 percent were transgender or non-binary. The bulk of riders — 64 percent — were men.

Further, 31 percent of women thought they would use scooters less than once a week in the future if the program continued and 19 percent said they would use e-scooters three or more times a week.

“If we want e-scooters to be a mobility option for everyone, we need to be thinking about providing safe and comfortable places to ride,” Dill wrote.

Dill and PSU will collaborate once again with PBOT to study ridership and develop best practices as e-scooters return to Portland. Graduate students will survey pedestrians in the spring to understand the problems better.

"We appreciate PSU's research on e-scooter and bicycle use," said Chris Warner, Interim Director of the Portland Bureau of Transportation. "PBOT's e-scooter pilot program has gathered more data than any other program in the nation, and we will continue to partner with PSU professors to use that data to understand the implications of e-scooter use for cities across the nation. We think that research on e-scooter use can help us find new ways to make our streets safer for everyone, regardless of how you travel."