For the sixth year in a row, the Pickathon Music Festival, which opens Friday, August 2 at Pendarvis Farm in Happy Valley, Ore., will feature a brand-new, temporary performance venue designed and built by Portland State University School of Architecture students from reused materials.

This year’s rendition of the Treeline Stage utilizes 160 wooden apple-harvesting bins to create an immersive environment suggesting an orchard of towering trees—reaching 40 feet high at the tallest point. The sprawling site design incorporates space for audio equipment, a “green room” area backstage, and space for food vendors and seating. 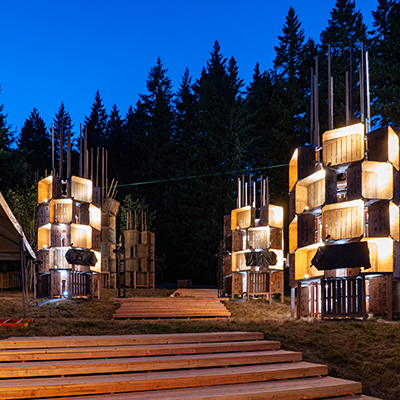 Taking inspiration from the structure of the apple blossom, the PSU architecture students and faculty constructed a series of towers using the apple bins, lent by a Pacific Northwest fruit producer. Situated where the meadow meets the woods, the Treeline Stage creates a magical performance environment for the 18 bands of various genres that will play there throughout the weekend, including Mereba, CAAMP, Julia Jacklin, JJUUJJUU, Bonny Light Horseman, Reptaliens, and Black Belt Eagle Scout. The Treeline Stage is one of six stages at the festival.

Continuing the “diversion design-build” concept in practice since the first Treeline Stage in 2014 (made from wooden shipping pallets), this year’s building materials are being diverted from their usual purpose, holding and transporting harvested apples, to form a breathtaking performance venue just for the festival. Immediately afterward, the stage will be dismantled and the apple bins will be returned to service just in time for the late summer apple harvest, leaving no waste.

In keeping with the zero-waste goal, leftover lumber used in the 2018 Treeline Stage will be reused as vertical elements supporting the apple bin towers.

“Diversion design-build” is a concept devised by School of Architecture faculty Travis Bell and Clive Knights, referring to the creation of a transformative performance venue from mass-produced construction-related materials that are temporarily diverted from their usual industrial purpose, and then sent back to work once the festival ends. The materials used in the Treeline Stage diversions since the inception of the concept are as follows:

The Treeline Stage venue features seven towers of varying heights positioned around the site, evoking an orchard of trees. Each tower is made up of 15 to 30 apple bins, with pentagonal clusters of five bins purposefully stacked atop each other to suggest collections of blossoms in a stand of trees. At the center of attention behind the stage platform is the tower called the “Queen Blossom,” with vertical columns reaching up to the sky, like stamens extending from an apple flower, and bins tilted in an opening gesture.

During the day, sunlight will illuminate the towers and create imposing shadows that traverse the field as the sun travels across the sky. At night, the towers will glow with light projected from inside the towers. Controlled colored LED lighting strips will adorn the interior of the boxes, creating a dazzling effect after sundown.

“Engaging the depth of the landscape became an ambition this year, through placement of built elements across the terrain, and by drawing upon the rich cultural narratives that pertain to the ubiquitous ‘apple’ and its regional agricultural significance,” said Clive Knights, professor and director of the School of Architecture.

The students’ inspiration for the overall site strategy and architectural form sprang from seasonal and botanical patterns. The number 5 also played a key role in the design process.

“A preponderance of five is prevalent in the life history of an apple. There are five sepals around the calyx, five petals in the flower, five stigma, pistils, and ovaries. Upon pollination, these ovaries develop into seed compartments, bearing five seeds,” the students wrote in their designers’ statement about the project.

“Each pod of five flowers has been stacked to create branches across the site. Composed as a tableau of blossoms, the orchard aligns at pivotal moments behind the stage and from each of the two entrances,” the designers wrote.

“This year the proposal takes over much more of the site than it has in the past,” said Molly Esteve, a Master of Architecture student involved in the project. Attendees meander through the “blossoms” like pollinators, enjoying the shade cast by the structures and experiencing the views of the eastern hills beyond.