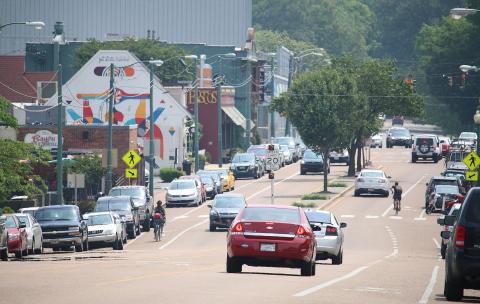 Despite longstanding popular belief, bicycle lanes can actually improve business. At worst, the negative impact on sales and employment is minimal, according to a new study from Portland State’s Transportation Research and Education Center (TREC).

The report is part of a larger National Street Improvements Study, conducted by Portland State University, with support from consulting firm Bennett Midland and the cycling-advocacy nonprofit PeopleForBikes. The study was funded by The Summit Foundation and the National Institute for Transportation and Communities.

Researchers studied 14 corridors in 6 cities — Portland, Seattle, San Francisco, Memphis, Minneapolis and Indianapolis — and found such improvements had either positive or non-significant impacts on sales and employment. Essentially, adding improvements like bike lanes largely boosted business and employment in the retail and food service sectors.

“I think that it is very significant that we found that positive business outcomes to the food service and retail industries on these corridors are persistent, even when we looked at different data metrics on employment or sales or when different analytical methods are utilized,” said Jenny Liu, associate professor in the Toulan School of Urban Studies & Planning.

Past studies examined the effects of street improvement corridors within specific cities, but this study is among the first to apply consistent and robust analytical approaches across multiple corridors and multiple cities.

The findings also provide policymakers and planners with an analytical framework and further evidence to support investment in non-motorized transportation infrastructure.

“The Street Improvement Study supports with data what we have seen in many communities: adding bicycle infrastructure boosts a neighborhood’s economic vitality,” said Zoe Kircos, director of grants and partnerships at PeopleForBikes. “Our collaboration with Portland State University and Bennett Midland on this research gives us more resources to share with cities across the U.S. that are eager to make bicycling safer and easier for everyone.”

Liu added that the partnership between PSU, PeopleForBikes and Bennett Midland contributed significantly to the end products that are directly targeted to planners and policymakers. The study produced in-depth reports for Portland, Seattle, San Francisco, Memphis, Minneapolis and Indianapolis.

Nationally, the study found the food service industry benefits most often from the addition of transportation infrastructure.

Even in cases where a motor vehicle travel lane or parking was removed to make room for a bike lane, food sales and employment tended to go up, according to the report.

“There is tremendous potential to expand on what we learned in this research project to additional cities and corridors, and to provide policymakers with the opportunity to evaluate street improvement projects before implementation or to collect additional economic/business metrics before and after implementation,” Liu said.

Photo by Michael Lander. Used with permission from the City of Memphis.