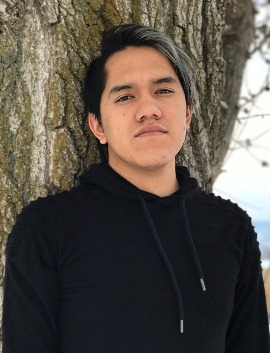 Luis Balderas Villagrana (left), 21, a “Dreamer” who is the first in his family to go to college, was elected president of ASPSU on May 4. His one-year term, and that of his new vice president, Lelani Lealiiee, starts June 1.

Villagrana’s family moved from their native Mexico to a small farming town in Eastern Oregon in 2004. He knew no English when he started first grade, but was determined to learn the language as quickly as possible. He accomplished that goal by second grade, which enabled him to excel in school and help his family at the same time.

As a senior in high school, he applied to colleges throughout Oregon. PSU was the first one to accept him. He came to Portland, fell in love with the city and PSU, and plans to stay through graduation.

Because he came here as a young child with his parents, Villagrana has been protected from deportation by DACA (Deferred Action for Childhood Arrivals). But the Trump administration’s efforts to eliminate DACA puts that protection in jeopardy. It’s that very threat that has inspired him to be active in student government.

“Being a DACA student showed me the importance of being involved,” he said. “I think this shows that I have capability and commitment. The actions of the Trump administration made me want to be an advocate. I think I have great ideas for making PSU the university that students want to see.”

Villagrana was appointed as an ASPSU senator during his freshman year, and became ASPSU’s Multicultural Affairs Director. He’s now finishing his sophomore year, and plans to focus his new role as president on three broad areas: collaboration with administrators, staff, faculty and students; enhancing campus-wide diversity; and improving student connections with businesses and government entities in the Portland area.

“I think in the past, student government has been too confrontational with the administration. Now, with the arrival of President (Rahmat) Shoureshi, I think we have the opportunity for a new conversation,” he said.

President Shoureshi said he is looking forward to working with the new student government.

“It’s essential that the student body and the administration have a close working relationship. I am excited to explore ideas with both Luis and Lelani over the coming year about how to make Portland State the best it can be,” he said.

Villagrana, a University Honors student, is pursuing a double major in International & Global Studies and Political Science, with a goal of interning with the United Nations.

“I want to help our ever-changing world and work with the United Nations to create stable governments and economies,” he said.