More than 38,000 people experienced homelessness in Multnomah, Clackamas and Washington counties in 2017, according to a Portland State University regional study.

The report on the scale and cost of addressing homelessness takes a comprehensive look at homelessness and housing insecurity in the Portland tri-county area (Multnomah, Washington and Clackamas) and the cost to provide housing and services. The PSU study is one of the first regional examinations of the homelessness population and cost.

“The goal in producing this report is to provide information on the scope and scale of the challenges our communities face in addressing homelessness and housing insecurity — not to advocate for a policy position,” said Urban Studies and Planning Professor Marisa Zapata, director of PSU’s Homelessness Research & Action Collaborative, which produced the report with the PSU Northwest Economic Research Center.

PSU researchers used a comprehensive definition of homelessness in their study to include some populations not captured in Point-in-Time (PIT) homeless counts, which are one-night counts that include people living in shelters, cars and on the street. Each county is responsible for its own PIT count, as required by the Department of Housing and Urban Development. Multnomah County’s PIT numbers were released earlier this month.

The PSU regional estimate also includes people living doubled up with friends or family — such as couch surfing or temporarily staying at someone’s residence — due to loss of housing or economic hardship. Sometimes described as the hidden homeless, this population is not counted in Point in Time but included in Department of Education counts.

“Homelessness is experienced differently within communities of color; a narrow definition of who has experienced homelessness leaves people of color out,” Zapata said. “Larger estimates such as the one we have conducted in this report will help better achieve racial equity and give a more complete picture overall.”

The report’s key findings include:

These estimates do not factor in what regional jurisdictions already spend on homelessness and homelessness prevention, nor the impact of the 2018 Metro and 2016 Portland affordable housing bonds, which total approximately $911 million combined, to serve this population. 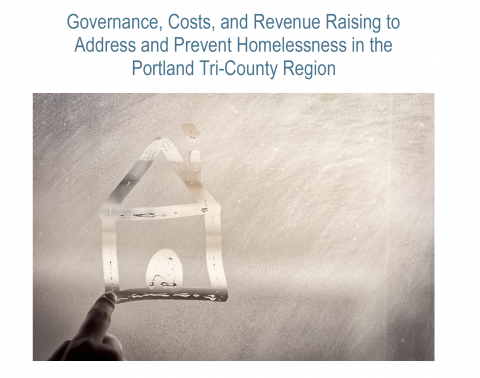 The report is structured to offer communities a range of options to address homelessness. It intentionally uses broad definitions and includes multiple populations, allowing communities to build their own plans with the available estimates.

It also offers revenue-raising options to help pay for the estimated costs over a 10-year period, and provides recommendations on how the tri-county region can move forward collectively on addressing and preventing homelessness.

“Homelessness has become increasingly visible on our streets and in our media headlines. Our overarching goal in this report is to provide information that helps the public deliberate about how to support people experiencing homelessness, and prevent future homelessness,” Zapata said.

The methodology in this report draws from existing homelessness counts, service numbers, cost estimates, income and housing market data to produce a reasonable estimate or series of estimates to help make sense of the scale of homelessness. They are not meant to be exact, and should only be used as guideposts.

The numbers provide a starting point for conversations on the resources necessary to tackle this issue in the tri-county area, and how we might go about raising the revenue to do so. Similarly, the governance section provides case descriptions about regional governance for homelessness in other areas, and considers options for the tri-county region.