What happens to slime in space?

Portland State Professor Mark Weislogel and graduate student Rihana Mungin teamed up with NASA to answer that question, conducting experiments in the cosmos on the green slime iconic to the children’s cable channel Nickelodeon.

“I think a lot of my enthusiasm showed through in the material because I grew up with Nickelodeon and slime,” Mungin said.

The video, which debuted May 5 on Nickelodeon, featured astronauts in space conducting experiments with slime. What floats in space, flops on earth. In space, the slime coalesced into floating bubbles freed from the tether of gravity. NASA’s Christina Koch and European Space Agency’s Col. Luca Parmitano, poke the blobs and bat at them with paddles, experiments that a group of children Mungin supervises attempt to replicate on earth.

“I’m gonna get messy, and my mom’s gonna get mad!” one girl declares as slime threatens to pour on her head.

But what’s even better than slime in space is that Nickelodeon partnered with an educational resource group, creating a classroom plan for teachers.

“Every time that we connect complex content with activities that engage and captivate the curiosity of students of all backgrounds, we are inspiring the next generation of artists, critical thinkers, inventors and scientists,” she said. “We look forward to learning more and partnering with such innovative colleagues in engineering and computer science.”

The video comes with accompanying teaching materials: a teacher’s guide, with post-video discussion questions; activities such as BINGO; a list of upcoming space station spotting opportunities and more. The materials and video are engaging for all age groups, Mungin said.

Elizabeth Stock, Portland Women in Technology’s executive director, said she was thrilled to see one of her organization’s board members — Mungin is the treasurer — sharing her knowledge on an “intergalactic stage,” especially during the coronavirus quarantine.

“Content that is fun and educational means more than ever right now, as parents scramble to find meaningful activities for their kids to engage in at home,” Stock said.

Mungin and Weislogel, her advisor and the principal investigator on the project, created the experiments the children and the astronauts perform. They plan to publish research on it, and Mungin will use the material for her master’s thesis.

The official NASA project name is Non-Newtonian Fluids in Microgravity. It explores liquids that change when force is applied — like ketchup getting runnier when shaken — reacting where gravity is less of a factor, as in space.

As amazing as it sounds, experiments like these are typical for Weislogel, who has been studying how liquids move in space for decades. Weislogel worked for NASA for 10 years and cultivated that relationship after coming to PSU in 2001, a boon to students.

“Our students go out into the industry with unique knowledge, not someone to be trained by the company, but someone who brings in unique experience and training,” Weislogel said.

The work that the PSU team has done in space was highlighted in a photo tweeted ‘round the world, featuring astronaut Samantha Cristoforetti clad in a Star Trek uniform sipping coffee from a lid-less cup that PSU experts designed. 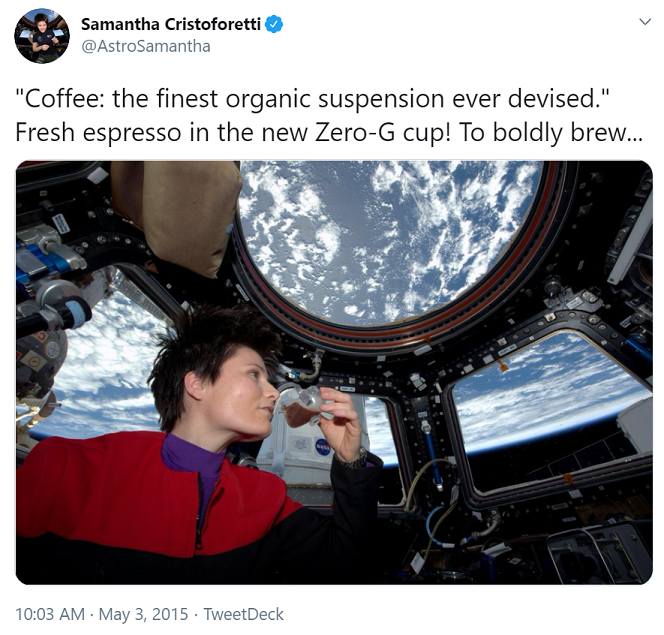 In 2017, Mungin launched weather balloons to view the full solar eclipse, earning her the NASA/Oregon Space Grant Consortium Undergraduate Team Experience Award. From coffee cups to weather balloons to slime in space, the work of the engineering students leads to inspiring content for educators at all levels.

In addition to her work in the lab and in the air, Mungin has touched others at PSU.

“As a father of nine children, I am involved in multiple areas of my life with children and young adults,” said Kevin Johnson, an electrician and fire-security alarm technician who worked with Mungin when she was employed with facilities at PSU. “It is always inspirational to be around people who elevate others and themselves. Rihana is an inspiration to me.”

Aaron Shear, zone maintenance supervisor and one of Mungin’s former coworkers, said the video delighted his 5-year-old, and the experience was even better because it involved Mungin.

“I couldn't be prouder to have Rihana as part of the PSU community,” Shear said. “I am glad I got to know her.”