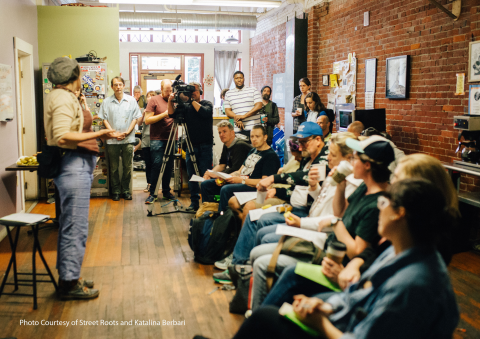 A team of community partners, including PSU’s Homelessness Research & Action Collaborative, released a report that will help shape Portland Street Response, a pilot program that will create an alternative to police response for low-priority calls for service involving those experiencing homelessness.

Currently police respond to many of these emergency dispatch calls even when they don’t involve a crime, tying up valuable resources. Advocates envision Portland Street Response as a way to connect people with necessary resources such as mental health, housing and medical services.

This summer community partners, including Streets Roots, a nonprofit newspaper, and PSU students working with the Homelessness Research & Action Collaborative fanned out across the city to interview people experiencing homelessness to help inform the design of the Portland Street Response.

"It was encouraging to see people from different backgrounds and affiliations coming together to address an issue,” said Emily Leickly, a PSU graduate student pursuing an advanced degree in community psychology. “But I most appreciate the Street Roots vendors I worked with who let me into their world. I hope we have a chance to collaborate again in the future.”

Portland State students and community partners interviewed 184 people in camps, shelters, sidewalks and parks in teams of two to three, each lead by someone who had experienced homelessness. They handed out necessities, including granola bars, sewing kits, flashlights and batteries, to people in appreciation for their time.

Students talked to those experiencing homelessness about what the Portland Street Response pilot should look like, including who the first responders should be, how they should approach individuals in crisis, what types of services and resources they should bring with them, and what types of training they should have.

“Including the voices of those who are often left out of these public safety policy conversations is the most powerful part about this experience,” said Greg Townley, research director for the Homelessness Research & Action Collaborative.

Survey respondents had powerful examples of both positive and negative interactions with first responders ranging from “horrible, embarrassing, degrading” to “compassionate, supportive.”

A thread that weaves through all the responses in the survey is a call to be treated humanely. For example, regardless of whether respondents answered that their experiences with different types of first responders were positive or negative, many experienced being treated rudely rather than with politeness and respect.

While many respondents stated that they would never call the police and that police should not be present for any responses, many others wanted police presence, particularly when it came to theft, robbery, harassment, violent crimes, danger to a child, rape and domestic violence. Most preferred other types of responses for calls about camping, sleeping, drug overdoses and mental health crises.

If not police, then who? The most common response was “mental health professionals.” Numerous respondents also noted the importance of social workers for referring people to housing and health services; peer support specialists and/or people who have experienced homelessness; and, to a lesser extent, EMTs and firefighters.

These responders should make the unhoused community feel safe through a variety of measures. The top suggestions included an assurance to not run checks for outstanding warrants, not to bring weapons and to bring food and water.

Other helpful supplies include hygiene products, backpacks or bags for people’s belongings and first aid/medical care supplies. Respondents also discussed the importance of getting connected to or referrals to housing and health services, with transportation to services being the second-most commonly reported need.

“Mental health awareness” was the most common answer when people were asked what kinds of training first responders should have. Respondents also noted here and elsewhere how important it is for responders to have good listening skills, and to not make assumptions about what the person needs.

Some of the most illuminating information from the survey comes from reading the experiences of those living unhoused, in their own words.

“When you already feel hopeless, and you’re at the end of your road, and you’re ready to jump or hang yourself, no one wants to be labeled or called an ‘unwanted person,'” stated one respondent.

The people surveyed were overwhelmingly positive, supportive and excited about the Portland Street Response. Numerous individuals emphasized the importance of respecting human dignity and treating people who are unhoused as human beings with a variety of complex life circumstances and needs.

“I would like to see Street Response to be the city’s first response in dealing with the homeless crisis,” said one respondent, reflecting the responses of many.