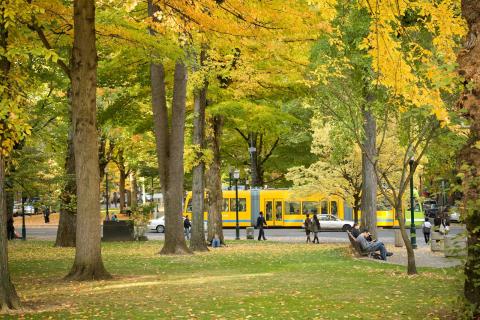 Digital City Testbed Center, or DCTC, is one of the two new research centers at Portland State University that launched last fall. Ever since it opened, people have asked “what’s a digital city?” and “what’s a testbed?”

First, the "digital city" part. More than half of the world’s population lives in cities, and innovations will be vital to maintain quality of life as that percentage grows. Smart or digital cities use low-cost sensors, predictive technology and interconnected apps to gather information that helps solve urban problems.

For example, DCTC is working with Professor Vivek Shandas to look at using smart sensors to monitor the health of urban forests, which are essential to the quality of life, managing heat and providing oxygen. Another project will use sensors to monitor near collisions to help improve safety for pedestrians, vehicles and cyclists.

In addition to smart trees, the center will focus on accessibility (using campus testbeds to try out new technologies that assist people with disabilities) and smart corridors (deploying multiple new technologies in selected areas on different campuses).

“The center gives us a place to test smart city technology to make sure it delivers on its promises,” said DCTC Director Jonathan Fink.

Faculty and student researchers with expertise in a wide range of disciplines — from transportation policy and urban planning to sustainability and computer science — will test the technologies, which is where the testbed part comes in.

They’re not just looking to see if these approaches work, but whether they help solve pressing urban issues such as reducing CO2, improving safety, preparing for earthquakes or improving accessibility.

Researchers will also consider potential concerns about data such as security, privacy and whether these technologies perpetuate implicit bias or inequality by using flawed algorithms.

For example, one controversial smart technology application not studied at DCTC is facial recognition. Smartphones use it to protect your privacy, but the same technology is used by law enforcement despite concerns that it is less accurate for women and people of color. The center does not have plans to test facial recognition, but it is an example of why technology needs careful study.

“The social implications of technology is where PSU can really shine,” said Fletcher Beaudoin, associate director of the Institute for Sustainable Solutions at PSU and DCTC advisor.

PSU also stands out when it comes to undergraduate research because of its location as an urban campus and its partnerships with the surrounding city, he said.

The center is partnering with the City of Portland, Technology Association of Oregon, the Port of Portland and the National Institute of Standards and Technology's Global City Teams Challenge. DCTC also has a national board of advisors that includes industry leaders from organizations including Microsoft, Intel, Bullitt Foundation, MetroLab Network and more.

The PSU testbed center is also connecting a network of urban campus testbeds throughout the Pacific Northwest that includes Oregon Museum of Science & Industry, University of Washington and University of British Columbia.

Testing these technologies on campus gives researchers, city governments, nonprofits and the PSU community a chance to better understand them and make informed decisions about their use in the future.

Cities around the world have used technology to help solve a wide range of urban problems including everything from managing rodent infestations and improving traffic safety to lowering energy costs.

San Francisco even used smart technology to help reduce traffic. The city determined that drivers circling for parking was a major contributor. To reduce this congestion and carbon emissions, the city developed a smartphone app that shows available parking with help from digital sensors.

The city also used the data to determine a pricing structure that gives drivers an incentive to seek out less frequently used garages.