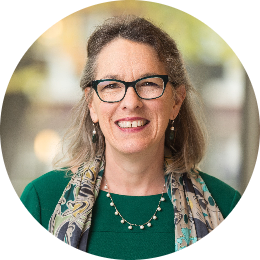 Dr. Greco received her Ph.D. in Romance Languages and Literatures from Princeton University. She specializes in medieval Arthurian romance, and also in electronic editions of medieval manuscript traditions. Her translation of le Ménagier de Paris, co-authored with Dr. Christine Rose, is available from Cornell University Press. The Greco-Rose team plans a second translation, of Jehan de Saintré. Dr. Greco’s past scholarly work includes co-authoring the electronic Charrette Project and publishing articles in Computers and the Humanities and Modern Philology. She has served on the Committee on Emerging Technologies in Research and Pedagogy of the Modern Language Association.

Her teaching interests include medieval and Renaissance French literature, French and Francophone film, and French composition. She spent the academic year 2006-2007 in Ouagadougou, Burkina Faso as a Fulbright Scholar, where she attended the FESPACO pan-African film festival and developed new curriculum. As part of her grant, she also taught American Studies and Literary Theory at the University of Ouagadougou.