Polyglot is a newsletter published by the Department of Foreign Languages and Literatures. With Polyglot we strive to create a forum for exchange with our supporters and alumni and to provide information on departmental developments.

In each issue you can expect to find news of the major language programs and of those in our many lesser-taught languages. We’ll keep you posted on new endeavors and department achievements. The department is a wonderful and dynamic place to study and work. We’re honored by the devotion and expertise of our faculty. We’re proud of our students, and we miss you once you’ve graduated.

Get us up-to-date with what is going on with you. If you know of classmates who have not received the Polyglot newsletter, encourage them to let us know where they are and what they are doing.We want to hear from them, too. This link will take you to our all purpose form which can add you to our email list, 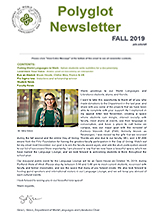 Dr. Marco Polo Hernandez Cuevas is presently a full tenured professor at North Carolina Central University where he teaches Spanish Language and Literatures and AfroLatin@ Studies. He holds a Ph.D. in Hispanic and Italian Studies from the University of British Columbia (2001); a M.A. in Spanish Language and Peninsular and Latin American literatures (1997); and a B.A. in General Studies & Spanish language and literatures (1989) from Portland State University. Among other publications, he has six books  three in English and three in Spanish: African Mexicans and The Discourse on Modern Nation (Lanham: UP of America, 2004); Africa en el carnaval mexicano (Africa in Mexican Carnival) (Mexico D.F.: Plaza y Valdes, 2005); Africa en Mexico:una herencia repudiada (Africa in Mexico: A Repudiated Heritage) (Lewiston: E Mellen P, 2007); The Africanization of Mexico From the Sixteenth Century Onward: A Review of the Evidence (Lewiston: E Mellen P. 2010); Eternidad (Eternity) a collection of his own poetry (Mexico D.F.: Plaza y Valdes. 2010); and The Afro-Mexican Ancestors and the Nation They Constructed (Lewiston: E. Mellen P, 2015). Dr. Hernandez has produced and directed a series of short films. In addition, he founded and directs: the Instituto Mexicano de la Africania Americana (Mexican Institute of Africana Studies) IMAA; the (http://africanastudiesjournal.googlepages.com/); and the (http://www.youtube.com/user/africanastudies). Dr. Hernandez has lectured in the Americas, Europe and Africa.

Selina Hickman – 2005: Selina earned her BA in Russian and went to work with immigrants and refugees at Portland area non-profits before going to work for the State of Oregon as a case manager for elderly and disabled Russian-speakers.  At the state, Selina began to grow a career in health care reform. She worked in the Advocacy and Development unit as a policy analyst for the Division of Aging and People with Disabilities and represented the Division on several state equity and diversity committees and councils. While working for the state of Oregon, Selina partnered across agencies to design and implement race, ethnicity and language data collection standards, contributed to the Oregon State of Equity report and developed performance indicators to measure disparities in access and outcomes according to race and ethnicity. Selina moved to the state of Vermont in 2013 where she works as the Director of Policy at the Department of Vermont Health Access.

Jacob Parsley – BA 2013: Jacob graduated from PSU with degrees in Political Science and Russian. He completed both the PSU Russian Domestic Flagship Program and the 2012-2013 Russian Overseas Flagship in Saint Petersburg. He is currently pursuing a MA in Russian, East European, and Eurasian Studies at Stanford University. Jacob is a recipient of two federal grants for Russian, a 2012-2013 Boren Scholarship and a FLAS Fellowship at Stanford. He hopes to begin a career in the federal government or pursue opportunities in the region.

Nataliya Pirumova - BA 2009: After graduating from the Russian Flagship Program, Nataliya attended UCLA and earned a Master's Degree in Slavic Languages and Literatures in 2013. She now works as a linguist at Disney Interactive developing Russian language support for children's video games.

Jan Underwood completed her MA in Spanish and French at PSU in 1998. She has been using her experiences in the PSU language classroom as inspiration for her writing. Her second novel, entitled Utterly Heartless, was published in September 2013. It is a tongue-in-cheek murder mystery and academic satire in which a college language professor gets done in. It takes place on a fictitious college campus in the Pacific Northwest--and in Hades. Visit www.funnylittlenovels.com for more information.

Michelia Kramer - 2011: Michelia graduated PSU in 2011 with a major in Anthropology and a minor in Turkish, having studied abroad in Istanbul during her second year and having earned a prestigious Foreign Language Area Studies (FLAS) fellowship during her last year. After graduating, Michelia was accepted into the Visual Design and Communication MA program at Sabanci University in Istanbul, and was offered a full scholarship to cover tuition and living expenses. The picture is of her presenting her graduate photography thesis entitled “Confronting Assumptions” at a gallery in Turkey. She credits the Turkish program at PSU with playing a major role in what she calls “the fantastic trajectory of my life.”

Diane Hofland – 2010, BA in Russian (post-Baccalaureate). Diane has used her Russian studies in some novel ways. She wrote to us and said, “Initially, I began studying Russian at PSU because of my lifelong love of bicycle touring, and I spent three summers riding thousands of miles in northwest Russia during my PSU tenure. In 2009, I was hired by the Russian Cycle Touring Club to be an assistant leader for an international group ride from Moscow to St. Petersburg, and then I did an unsupported ride in the far north (from Arkhangelsk to Velikii Ustyug), which was an amazing opportunity to visit some really remote villages and ancient church structures.” Diane went on to explain, “But it’s not just about bicycling. My professional background is in publication design, and I produced several anthologies of student work in Russian while I was taking classes at PSU. I also worked as an intern at IRCO (Immigrant & Refugee Community Organization) in Portland doing desktop publishing in a wide range of foreign languages, but I specialized in working on Russian documents. Additionally, I designed some curriculum material for the Russian immersion program at Kelly Elementary School in Portland.” Diane also produced Polyglot, the WLL newsletter, for four years and she worked as a photographer for our Russian Flagship program for several years as well. Since earning her post-Baccalaureate degree, Diane has focused her energy on providing both elder and child care for her extended family. “But I anticipate getting back to my Russian studies,” she says. “For me, learning a foreign language is like long-distance cycling: it is a long term pursuit that facilitates the most remarkable adventures while expanding one’s ability to do meaningful professional work.”

Neyssa Hays - BA 2008: “I have found my degree in Russian to be an invaluable asset in the job market.  In fact, I was told that having Russian on my application was what gave me the extra appeal needed to land the job!”  During her work as a park ranger for Oregon State Parks and Recreation Department (OPRD), Neyssa has used her language skills to assist park visitors, to diffuse negative situations, and in nature presentations to Russian speaking families.  In addition to using Russian as a park ranger, Neyssa has worked as the recruitment coordinator for the Russian Flagship Program at PSU, and as a teaching assistant in the Russian Immersion Program at Kelly Elementary.  She is currently the Chair of the parent group for the immersion program, Vmestye, and is finishing a BS in Fisheries and Wildlife Sciences with hopes of working as a biologist on both coasts of the Pacific Ocean.

Ryan Goodwin - BA 2009: Ryan studied Ancient Greek, Turkish, Russian, and a little French while at PSU, and graduated with a double major in Russian and Applied Linguistics and a Turkish minor in 2009.  He sent an email and said, “After PSU, I spent three months studying Turkish in Istanbul, and went on to study Kazakh at the University of Wisconsin at Madison where I earned my MA in 2011.”  In addition to two internships abroad, Ryan has worked at Georgetown University and elsewhere as a foreign media analyst and translator, mostly doing Russian and French, but also Turkish, Azeri, and Kazakh.

Dr. David Johnson, BA in History with minor in German (1995), is Associate Professor of German and Director of the Global Studies Program at the University of Alabama in Huntsville. He teaches courses in both Global Studies and German and also administers study abroad courses and programs for UAH students. Dr. Johnson has published in a number of areas of inquiry, including representations of masculinity, leisure, consumer culture, and immigration.  His current research focuses on literary depictions of German-Polish encounters and what these interactions reveal about the complexities of German-Polish relations from the early nineteenth century to the present. In May 2011, Dr. Johnson was selected as the Outstanding Faculty Member in the College of Liberal Arts at UAH.

Nataliya Pirumova - BA 2009: Nataliya Pirumova, class of 2009 and former Flagship student, will be attending UCLA this fall, pursuing her Ph.D. in Slavic Languages and Literatures.

Yasunori Fujisaki: Yasunori Fujisaki, who taught Japanese in FLL for four years as a graduate student in TESL, has accepted a position as a full-time instructor at Harvard starting in September. He will be in the East Asian languages and Civilizations Department (EALC), teaching at the beginning level initially. He has also agreed to teach in the summer intensive Japanese program at International Christian University (ICU) in Tokyo this summer.