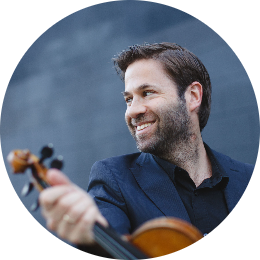 Hailed by Michael Tilson Thomas as "an excellent violinist," Tomas Cotik was a first-prize winner at the National Broadcast Music Competition in his native Argentina in 1997, and the winner of the Government of Canada Award for 2003-2005. He is internationally recognized as a soloist, chamber musician, and teacher. An avid recording artist, Dr. Cotik is currently involved in more than fourteen CD recordings for Naxos and Centaur Records, which have received over a hundred reviews and the highest praises from some of the best-known publications such as Fanfare, American Record Guide, Downbeat, Washington Post and The Strad. These recordings include Schubert’s complete works for violin and piano, Mozart complete sonatas for violin and piano and two Piazzolla albums with Cotik’s own arrangements.

Tomas Cotik has performed hundreds of recitals and chamber music concerts across the globe. Formed in 2011, the Cotik/Lin Duo was recently selected as the only duo on the roster of the Live on Stage concerts and will tour extensively throughout the U.S. in the coming seasons. He was also a member of the acclaimed Amernet, Delray, and Harrington string quartets. He was also a rotating concertmaster of the New World Symphony and performed as concertmaster of the Minas Gerais Philarmonic in Brazil. Cotik has performed with several internationally prominent conductors such as Michael Tilson Thomas, Valery Gergiev, Roberto Abbado, Yakov Kreizberg, Marin Alsop, Stephan Deneve, Roger Norrington and Robert Spano in notable venues such as Carnegie Hall. He has worked closely with artists such as Joseph Kalichstein, Franklin Cohen, Midori, Christian Tetzlaff, Ana Chumachenko Heinz Holliger, Leon Fleisher and members of the Cleveland, Miami, Pro Arte, Vogler, Vermeer, Tokyo, Endellion string quartets, as well as the leaders of Vienna, Berlin, New York, Philadelphia, Boston, Cleveland, and San Francisco Symphony. Pop music collaborations include recordings with Natalie Cole, Gloria Estefan, Barry Gibb, and George Benson as well as performances with Smokey Robinson, Donna Summer, Bobby McFerrin, and Chick Corea.

Committed to passing on his passion for music, Tomas Cotik regularly provides master classes, lectures, and presentations around the country. In the work with his students, Tomas emphasizes a natural approach to the instrument, providing tools to avoid physical tensions. His recent articles on this philosophy and other topics were published by The Strad. His ultimate goal is to guide his students so that they cultivate, develop, and further their individual artistic visions and professional dreams. Another emphasis as a mentor is guiding his students to develop career tools that will help them succeed as performers in the 21st century.

Tomas Cotik earned a Doctor of Musical Arts degree from the University of Miami. He holds Bachelor and Master of Music degrees from the Freiburg University of Music in Germany and an Artist Diploma from the Glenn Gould School in Toronto.

Dr. Tomas Cotik was appointed Assistant Professor of Violin at Portland State University in 2016. He previously taught at West Texas A&M University, Florida International University, and at the University of Miami’s Frost School of Music.