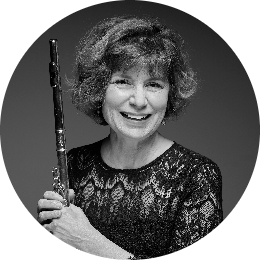 Flutist, Sydney Carlson has been inspiring audiences with her sparkling and expressive playing for over 30 years. Highly sought after as a performer and mentor, Sydney has concertized and taught in Mexico, Europe, China, South America, and throughout the United States.

She delights in guiding students of all ages to reach their potential as musicians. She seeks to create a positive student-teacher relationship and strives to be a creative and inspiring mentor. Students have gone on to careers in the United States, China, and South America. She is currently Associate Professor of Flute at Portland State University with students from the United States, Brazil, Korea, and China. Her teaching focuses on exploring a wide variety of genres with a foundation in classical repertoire.

She is a founding member of the Museaux Trio that released a CD in 2015 with the premiere of Karim Al-Zand's "Studies in Nature". The IWO Flute Quartet released a CD in 2018, "The White Labyrinth" with the music of Harvey Sollberger. Both groups have been invited to perform at the National Flute Association’s annual convention, in addition to performing throughout the United States.

Dr. Carlson holds degrees from the Eastman School of Music, East Carolina University, and the University of Houston. Her teachers include Byron Hester, Bonita Boyd, and in masterclasses led by Julius Baker, Jean-Pierre Rampal, and James Walker.