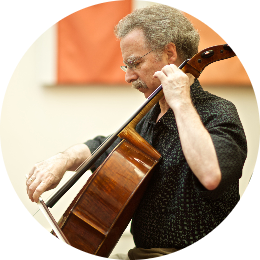 Hamilton Cheifetz has been described in Fanfare Magazine as “unquestionably a magnificent player" for his solo recordings, and he has performed throughout North America and in Europe, Asia, and Australia. A native of Chicago, Cheifetz began playing cello when he was seven and first appeared as soloist with orchestra at the age of eleven. He studied with Janos Starker at Indiana University beginning at the age of 16 and later became the teaching assistant to Tsuyoshi Tsutsumi at the University of Western Ontario. The winner of the Piatigorsky Prize at Tanglewood, he toured the United States and Canada on the Music from Marlboro concert series and performed at the White House for President Carter and the members of Congress. He was presented in a solo recital in the Sydney Opera House and has often been featured on National Public Radio’s “Performance Today.” His playing was highlighted, together with jazz great Dave Frishberg and vocalist Rebecca Kilgore, on the CBS television special “Gary Larson’s Tales From the Far Side.” In 2001, he performed duos in concert with Janos Starker which were broadcast nationally on NPR, and he appeared with the Chamber Music Society of Lincoln Center in New York.

Professor Cheifetz presented solo recitals and gave master classes in China in the spring of 2010 in Beijing and Tianjin and returned to China for concerts in 2012. He has taught as Guest Lecturer at Indiana University, and he performed recitals and presented master classes with pianist Julia Lee in Korea in 2016. He has recorded for Koch, Delos, New World, and Gagliano Recordings and is featured on “Sound of the Five”, chamber music of Chen Yi, with Third Angle Ensemble. Darrell Grant invited him to play in the premier of “Territory” which was later performed at the Portland Jazz Festival. In the summer of 2014, he performed chamber music in Puebla, Mexico, as well as performances in Germany in 2018.  He performed for many years at Chamber Music Northwest, and in 2017 he performed with jazz legend Paquito D'Rivera.   In 2018 he performed Schubert Quintet as guest artist with the Takacs Quartet.

Hamilton Cheifetz is professor of music at Portland State University and a founding member of the Florestan Trio, which is celebrating its 44th season this year. Together with pianist Janet Guggenheim and violinist Carol Sindell, the Florestan Trio has received international acclaim, including three tours of Japan and concerts in Europe. A dedicated teacher, Professor Cheifetz’s students have gone on to positions in orchestras such as the Boston Symphony and Atlanta Symphony.

Hamilton Cheifetz can be heard live in concert in audio recordings and videos at his website at hamiltoncheifetz.com. He is a member of the Subud International Cultural Association, an organization dedicated to promoting original culture, creativity and spirituality.