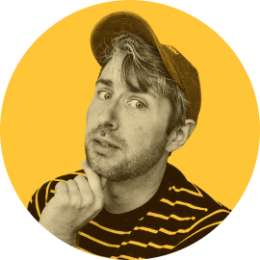 Sean Schumacher has been a graphic designer for more than a decade with work in both interaction and print design. His specialty has been in serving mission-driven organizations in the arts and education fields. He was the designer for the Portland Institute for Contemporary Art and its TBA Festival from 2014 to 2017.

Sean's practice takes many forms, frequently making use of design and art strategies to tell stories that might otherwise be too ephemeral to be noticed. He's rebuilt the erased walls of a demolished building in the middle of the space that replaced it, made and tore apart a map of a long-lost place at a one-to-one scale, and thrown a 50th birthday party for one of his alma mater's most forgotten important buildings. His recent work seeks to shine a light on the thrill inherent in the process of design itself.

As an instructor, it is his passion to bring a hands-on, collaborative, learning-while-doing approach to online and hybrid design education. Most emblematic of his teaching strategy is in his work with Kate Bingaman-Burt coordinating A+D Projects (DES 425), the School of Art+Design’s in-house design studio.

Schumacher received his MFA from Portland State University’s Studio Practice graduate program in 2012 and his BFA in graphic design from the University of Nevada Las Vegas in 2009. He has taught in various roles in the PSU graphic design program since 2011.