Situated on the eastern flank of the Ring of Fire, a belt of volcanic activity along the rim of the Pacific Ocean, Oregon's legacy of volcanism has defined many of the state's geologic and geographical features for millions of years. From the peaks crowning the Cascades to the calderas of central Oregon, the sagebrush lands of the high desert and scenic canyons such as the Columbia River Gorge, volcanoes have helped shape the Oregon landscape.

Portland State University geology professor, Martin Streck is a volcanologist whose research explores volcanoes, how they erupt and how the magma they produce spreads during an eruption. Streck recently received a three-year, $325,000 grant from the National Science Foundation to test competing theories for the origin of magmas that erupted millions of years ago, creating the land formation that makes up vast swaths of eastern Oregon and Washington. 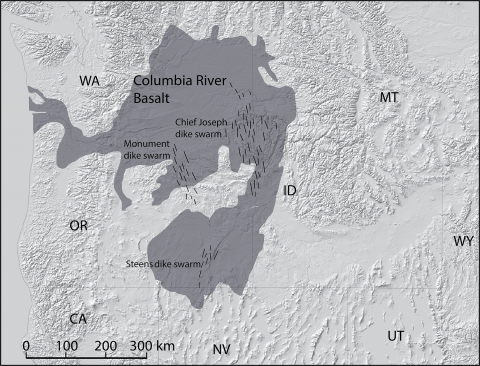 Today, eastern Oregon is known for its quiet, open spaces, rugged landscapes and scenic beauty. Such was not the case 17 million years ago when the region entered a period of intense volcanic activity that persisted for over ten million years. The eruptions produced what is called the Columbia River Basalts (pictured)— lava flows that in some areas are thousands of feet thick, covering an area larger than the state of Montana.

Unlike eruptions from volcanoes like Mt. St. Helens in the Cascades that are fueled by the mechanics of plate tectonics, the geologic activity that resulted in the eruptions that produced the Columbia River Basalts came from what geologists call a "hotspot." Hotspots are large reservoirs of semi-molten rock below earth's crust. Today, smaller hotspots similar to what erupted in eastern Oregon millions of years ago are erupting in Hawaii and Iceland.

According to Streck, during these hotspot eruptions, magma rises from fissures in the earth's crust called feeder dikes (pictured top). As the magma cools, it creates new layers of rock. Over time, erosion exposes the dikes, which are then available for scientists to study. Across eastern Oregon, the remains of these fissures dot the landscape as scars on the surface of hillsides and the walls of canyons.

As Streck explained, there are currently two competing theories about the source of magma that formed the Columbia River Basalt. One is that the lavas rose vertically from sources beneath the dikes. A second theory draws on the latest research and hypothesizes that the magma that fed the eruptions traveled great distances horizontally, under the surface, to reach the fissures that flooded the ancient landscape with lava.

Working with collaborators from Oregon State University, Washington State University and the University of Auckland, New Zealand, Streck, along with a team of graduate students from Portland State University, will travel to the locations of multiple feeder dikes in eastern Oregon to collect rock samples. Through geochemical analysis and an investigation of the magnetic orientation of minerals within the rocks, the team plans to determine whether there was a single source or multiple sources of magma feeding the dikes. If a single source fed the eruptions, how far did the magma travel laterally beneath the surface? And how old are the various layers of lava deposited by eruptions during the period of volcanic activity?

"The area covered by these lava floods and the volume of material that erupted through these feeder dikes is of a scale unlike anything we see at hotspots active today," Streck said. "So, this research can provide critical insights into the heart of how our planet functions and the formation of many of the landscapes we can visit today in Oregon and Washington."

*This research is funded by the National Science Foundation: Award# 1946292