On 4 December 2013, the Intergovernmental Committee for the Safeguarding of Intangible Heritage of the UNESCO inscribed twenty-five new elements on the Representative List of the Intangible Cultural Heritage of Humanity. One of those elements was "Washoku, traditional dietary cultures of the Japanese, notably for the celebration of New Year." The recognition of washoku as world heritage is considered by the Japanese government officials as yet another project that contributes to the projection of Japanese 'soft power,' as yet another form of Japan's so-called "content industries," such as manga, anime, fashion, and design.

Similar sentiments are shared by their counterparts in South Korea, who on the very same day celebrated the inscription of "Kimjang, making and sharing kimchi in the Republic of Korea" on the UNESCO list. There was an important difference between the two nominations, which Dr. Cwiertka will explore in this lecture. She will argue that washoku is a myth fabricated for the purpose of Japanese nation-branding, and is currently on its way to becoming internalized by the Japanese population and the lovers of Japanese food worldwide.

Katarzyna J. Cwiertka is author of Modern Japanese Cuisine: Food, Power and National Identity and  Cuisine, Colonialism and Cold War: Food in Twentieth-Century Korea. She is an established expert on food history of modern Japan and Korea, both as a domain of culture and as a window into historical inquiry that extends beyond the realm of cuisine and nutrition. In her research, food serves as a vehicle to talk about social change and global interconnectedness facilitated by colonialism, war, and cultural imperialism. She is Chair of Modern Japan Studies at Leiden University. She has an MA degree in Japanese Studies from Warsaw University, Poland, an MA degree in Area Studies from Tsukuba University, Japan, and a PhD from Leiden University.

With Support from the United States-Japan Foundation. 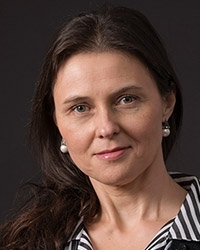