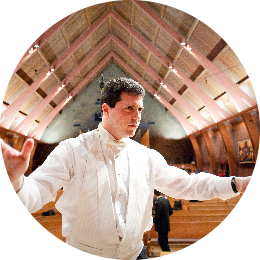 Hailed by The Oregonian for providing “the finest choral concerts in Portland in recent memory,” Ethan Sperry is in his eleventh year as Director of Choral Activities at Portland State University, where he conducts the world-renowned Chamber Choir and leads undergraduate and graduate programs in conducting. He is also the Artistic Director and Conductor of the Oregon Repertory Singers, one of the America’s most distinguished adult choruses. Choirs under his direction have performed at over a dozen ACDA and NAfME Conferences, won over thirty awards and medals at international choir competitions on four continents, and sung at The Hollywood Bowl, The Kennedy Center, and the United Nations. Under his direction in 2013 The Portland State Chamber Choir became the first American Choir ever to win the Grand Prix at the Seghizzi International Choral Contest in Italy, and in 2017 they became the first American choir to win the Grand Prix at the Bali International Choral Festival, the largest choral gathering in Asia.

Sperry has recorded albums for the Naxos and Gothic labels. His 2017 release The Doors of Heaven: Music of Eriks Esenvalds hit #1 on the Billboard Traditional Classical Chart and was named a “Recording to Die For” by Stereophile, both firsts for a University chorus. His 2018 release Shadows on the Stars: Music of Morten Lauridsen and Other Pacific Northwest Composers with Oregon Repertory Singers was awarded The American Prize in Choral Music.

A prolific arranger of World Music for choirs, Dr. Sperry is the editor of the Global Rhythms series for Earthsongs Music, one of the best-selling choral series in the world, and is also published by Hal Leonard. Sperry is also a frequent collaborator with film composer AR Rahman and has appeared as a guest conductor for him numerous times including at Bollywood Night at the Hollywood Bowl and the 2008 Filmfare Awards, the Indian equivalent of the Oscars. He also serves as a consultant for the KM Music Conservatory in Chennai, the first classical music school in India, which opened in 2009.

Born in New York City in 1971, Sperry began studying conducting at the age of eight, cello at the age of twelve, and singing at the age of eighteen.  He has earned a bachelor's degree in Philosophy from Harvard College and Masters and Doctoral degrees in Choral Conducting from the University of Southern California. Prior to moving to Oregon, Sperry served for 10 years on the faculty of Miami University in Ohio where he conducted the Men’s Glee Club, Collegiate Chorale, and Global Rhythms Ensemble. He has also served as Artistic Administrator of the Arad Philharmonic Chorus in Romania and Conductor of the Coeur Regional de Guadeloupe, the only Symphonic Chorus in the French West Indies.