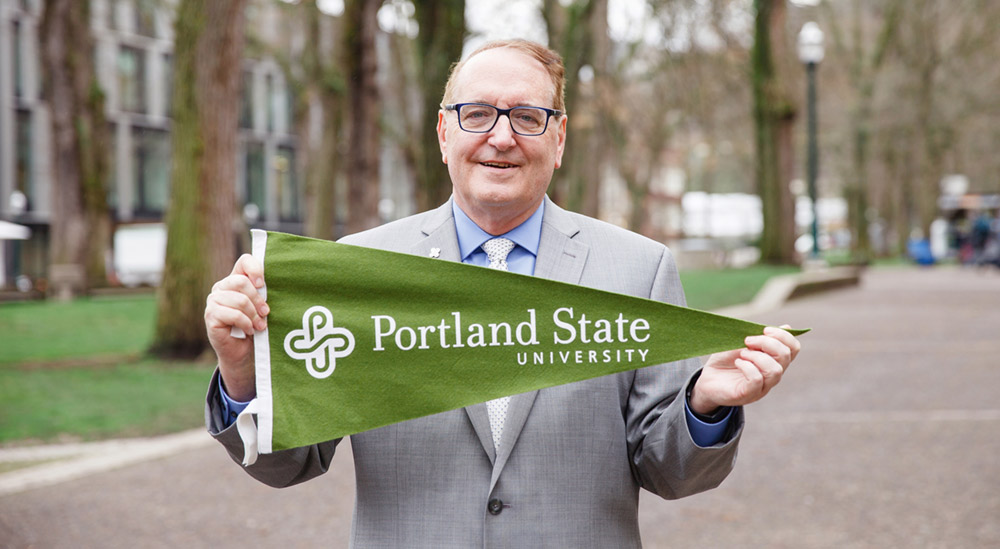 Now in his fourth decade as an educator and leader, PSU President Stephen Percy has dedicated his career to fostering vibrant connections between universities and the communities they serve.

An expert in public policy, administrative ethics and urban politics, Percy is known for his ability to advance civic engagement and create innovative solutions by linking the skills and capacity of universities to the knowledge and energy of communities.  He believes in using collaborative, interdisciplinary applied research to facilitate university-community partnerships that solve problems and improve the quality of life.

Passionate about promoting educational access for all students, President Percy has worked extensively with diverse, urban-serving universities, including the University of Wisconsin-Milwaukee and the University of Baltimore, where he was founding dean of the College of Public Affairs. He joined PSU to lead the College of Urban & Public Affairs in 2014, was appointed PSU’s interim president in 2019 and named president in 2020.

President Percy has authored two books about disability rights and civil rights and co-authored four books and the textbook “American Government: The Political Game.” At PSU, Percy led several campus-wide initiatives, including the planning process that resulted in priorities and goals for PSU from 2016-2020.

As PSU gets ready to celebrate its 75th anniversary, Percy and his leadership team are taking a close look at how the university can expand and deliver upon its access mission by building anti-racist practices and policies.

Taking our first steps towards a more equitable and just PSU

I’m writing today to tell you about the important first steps we have taken toward our shared goal of eliminating racism and creating equity and justice on our campus. I’m personally committed to this important, long-term work, and I invite you to participate in what must be a collective effort to move it forward.

The COVID-19 pandemic and social unrest associated with ongoing racial injustice have challenged the vibrancy of our community and downtown. Today, Portland is at a crossroads. It is time to take stock, learn from adversity, and pick the direction that will create a path to a renewed and more resilient city.

Convocation: A new vision of resilience

Our next challenge is before us: How do we learn from the pandemic experience to plan for a stronger future? The work you have done in recent months propels us forward on that journey. We have amazing talent, energy and commitment on our campus, key assets to creating resilience.