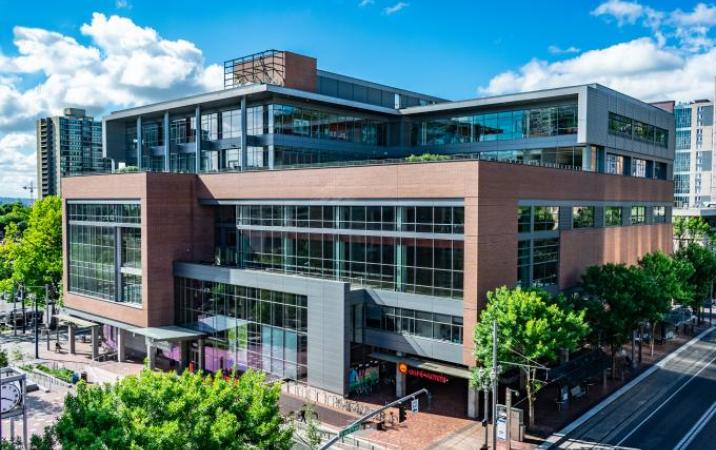 All Gender Restrooms Four single-occupancy restrooms in the following locations:

The Academic and Student Recreation Center (ASRC) building, is a condominium partnership between Portland State University and the City of Portland.  It fronts onto the PSU Urban Plaza located between SW 5th and 6th Avenues to its east and west and SW Montgomery and Harrison Streets to its north and south. It is north of the University Center Building and south of the Urban Center Building.

Completed in late 2009 and opened for use on January 3, 2010, the building was designed by Yost Grube Hall Architecture at a cost of $72 million. It replaced a one-story PSU structure, known as the Portland Center for Advanced Technology (PCAT), which PSU had leased from the City of Portland beginning in 1983 before purchasing it for $2.1 million in 1985. The ASRC is LEED Gold certified with sustainability features that include photovoltaic panels on the roof, electricity generating elliptical machines, plumbing and fire protection systems powered by a rainwater, and numerous heat recovery systems.

The ASRC's second, third, and fourth floors house the Student Recreation Center while the rest of the floors are divided amongst academic, student workspaces, retail businesses, and other spaces. The first floor houses retail spaces and PSU’s Transportation and Parking office as well as the main building lobby and the University Welcome Center. The fifth and sixth floors are respectively home to the City of Portland's Archives & Records Center and the PSU School of Social Work. The recreation facility includes a three-court gymnasium; 1/10 mile three-lane running track; a cardiovascular and weight training facility; multi-purpose group fitness suites; an aquatic complex including a lap pool and whirlpool spa; locker rooms; and a bouldering and climbing wall.