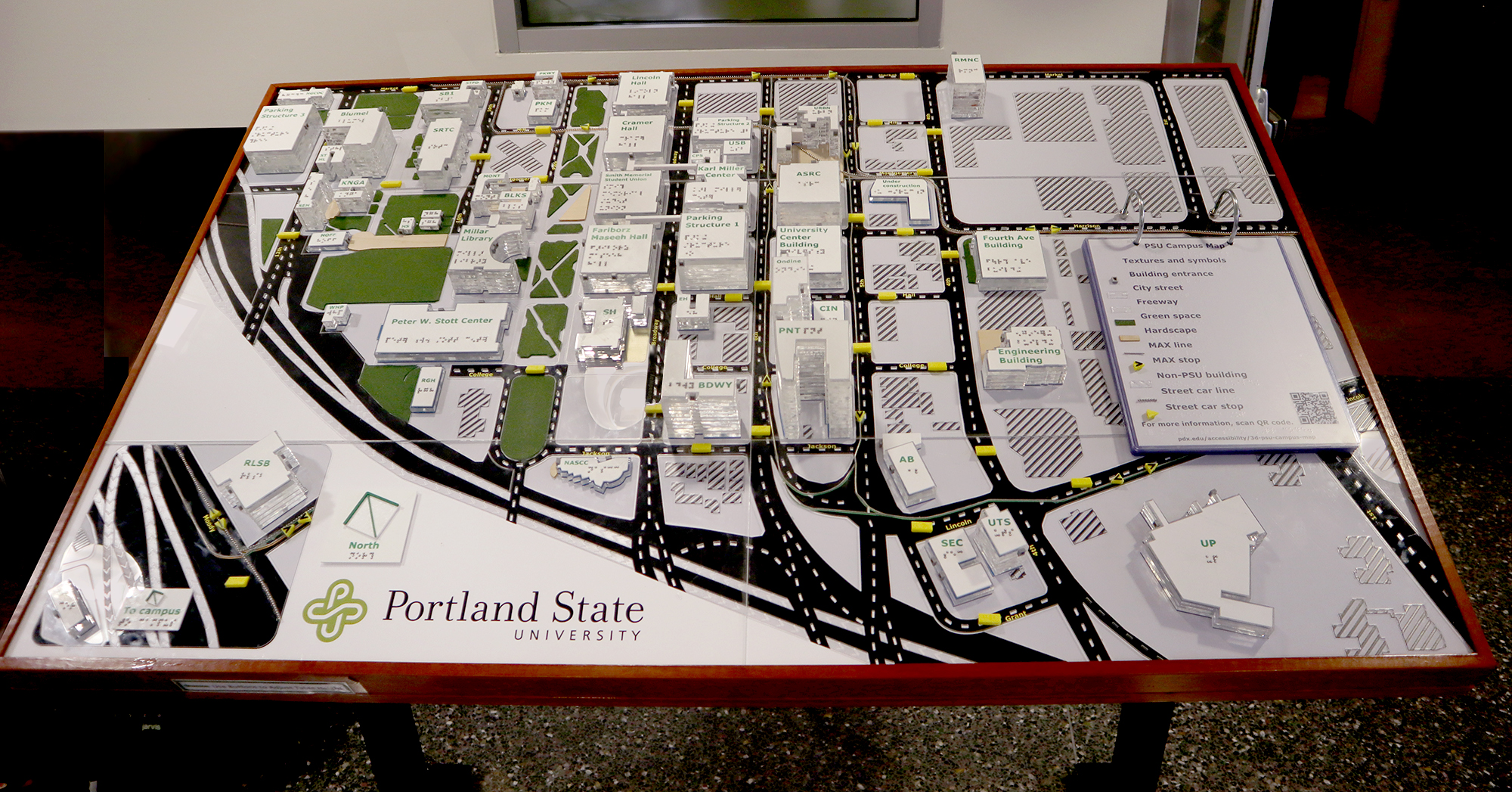 In 2018, Portland State University’s Accessibility Committee submitted a proposal to the Student Fee Committee (SFC)for funding to create a functional 3D campus map for placement in Smith Memorial Student Union (SMSU). The intended purpose of this map was to help mitigate accessibility barriers on campus related to wayfinding, orientation, and mobility for people who are blind or visually impaired. The project was inspired by similar wayfinding projects at universities like Texas A&M, who developed and placed their own 3D map for the Texas A&M campus in 2018. As part of the research and development process, the Campus Planning Office (CPO) reached out to both on and off campus resources in order to establish the scope of the project.

When $30,000 in funding was approved by the SFC; the CPO, the Disability Resource Center (DRC), and a team of subject matter experts from Portland Community College (PCC) partnered with blind students from Portland State University (PSU) to turn the idea into reality.

“Nothing about Us without Us” is a foundational slogan of the disability rights movement. It reinforces the idea that doing accessibility work without the input, participation, and expertise of people with disabilities—and in this case, specifically students who are blind—would be misguided and potentially further disabling rather than accessible and inclusive. To that end, the team specifically invited students who were blind to provide targeted feedback at every stage of development. CPO scheduled a series of four two-hour end user feedback sessions over the course of three months, as the team from PCC developed increasingly accessible and user-friendly iterations of the map.

The students who attended these meetings were incredibly helpful in determining what features were most important and why, especially as PSU’s downtown location spans many blocks. The team from PCC created prototypes at each stage of the design and fabrication process.  For example, once it was determined that the skybridges were essential to the usability of the 3D map, students confirmed that relative height of PSU buildings (the number of floors above ground) would be necessary. Transit also played a key role. Textures and materials were tried, tested, and ultimately chosen based on student feedback. The max line, for example, is represented by thick wire similar to guitar string, while the streetcar is represented by ball chain. Students liked these choices because the sound of the train is continuous, while the streetcar emits a “clickity clack” sound as it arrives.

One of the user feedback sessions addressed the labeling of streets with braille. The concern was that when people reached between buildings to read braille labels, the height of the buildings could potentially make reading difficult as the angle of approach would be too steep. To address this challenge, one of the students suggested angling the braille labels to counteract this. This novel idea was then successfully implemented in the final project. These are just a few examples of the ways in which students influenced map features substantially and positively. At the conclusion of the project, one blind student, Katie Durden, shared that that map would “be an excellent way for new sight impaired students to familiarize themselves with our campus. It was also a lot of fun helping to think up ideas on how to make it.” 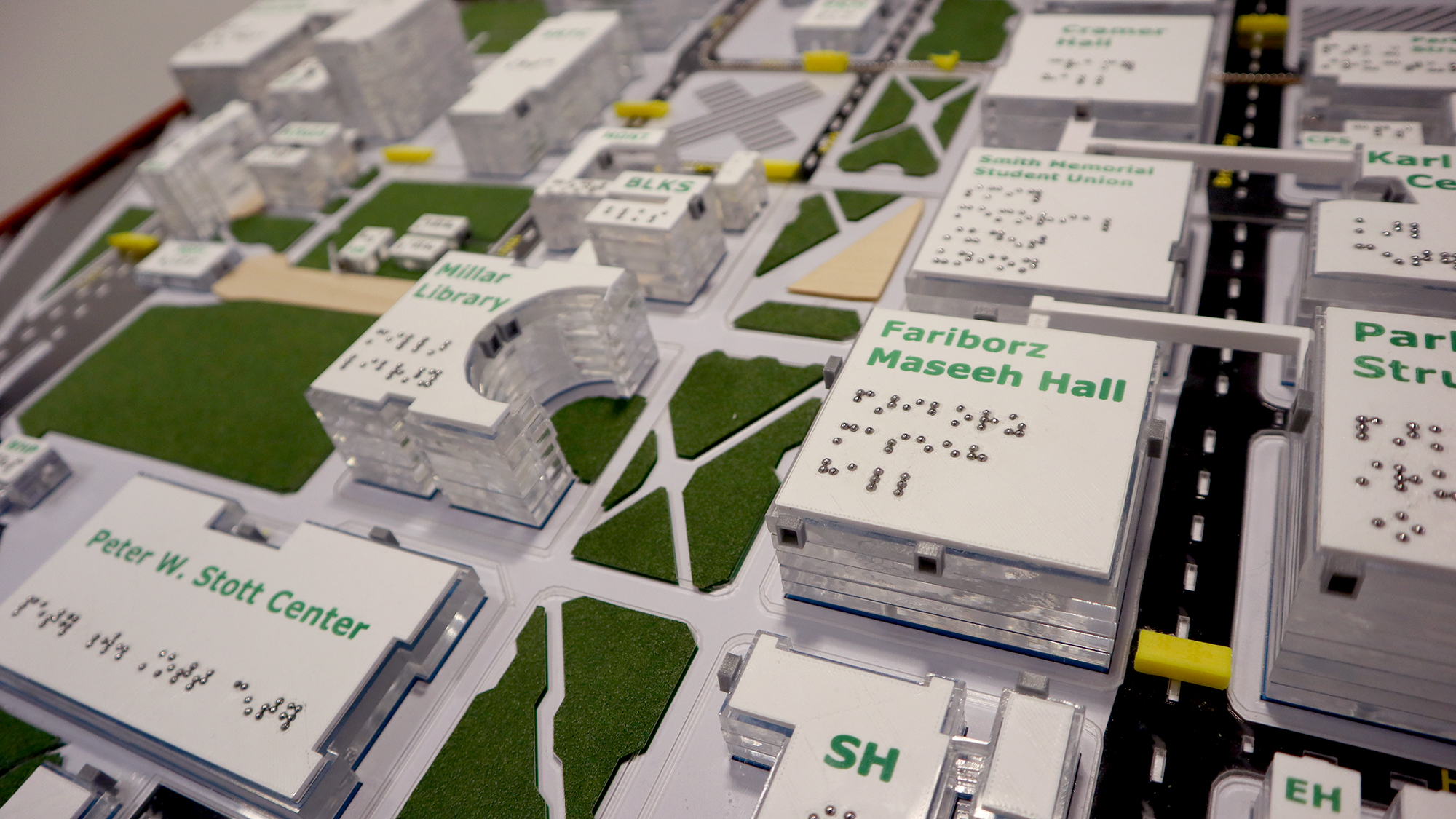 Our co-collaborators from PCC Disability Services were incredibly creative and were able to add, modify, and remove features of the map based on the real wayfinding experiences and needs of end users, as reported by the group of students with whom we consulted. In addition, they were able to ensure that the map was constructed and assembled in a way that would allow for updates as needed. When the map was completed and ready to be placed, Capital Projects and Construction staff worked closely with CPO to build a custom podium retrofit to an already adjustable table frame. This allows the 3D campus map to be as accessible as possible to all users at various heights. Ultimately, between the labor and material costs, the project ended up coming in under budget, costing around $15,000. Now that this map is in place, the hope is that the complex, urban spaces that make up the PSU campus will be more readily accessible to visitors, prospective students, new staff, and others with visual and mobility impairments who are visiting SMSU for the first time. This map is one step in the right direction to make accessible wayfinding even more of a priority for PSU.

Stop by and visit the 3D PSU Campus Map in the Smith Memorial Student Union lobby at 1825 SW Broadway, Portland, OR 97201!