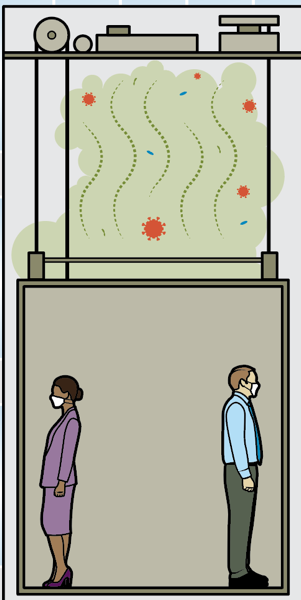 In normal times, people don’t think twice before hopping in an elevator, but sharing a small box with even one other person can feel like a risky proposition during a pandemic. Thankfully, research by Richard Corsi, dean of PSU’s Maseeh College of Engineering and Computer Science, suggests there are ways to reduce your risk. Corsi’s research normally focuses on the science of indoor air pollution. When the COVID-19 pandemic began, he found himself becoming an expert on how SARS-CoV-2—the virus that causes COVID-19—spreads in dierent indoor environments. In part because elevator rides are usually short, Corsi’s modeling suggests that it may be relatively safe to ride an elevator with other people, given precautions. “There will need to be new elevator etiquette,” he says.

Corsi used fluid dynamics to model virus concentrations in the air during a typical elevator ride. As there’s usually about one full air change per minute when an elevator travels up and down, it appears unlikely that airborne virus from former occupants sticks around long, especially if the elevator stops at multiple floors.

“Particles that come out of our respiratory systems are like an Uber or Lyft ride for the viruses,” Corsi says. There are 100 to 1,000 tiny droplets for every big droplet. Fewer are released when you only breathe; more if you talk, sing, or cough. 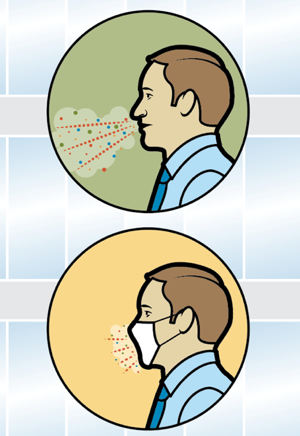 The number of people on board should be limited to 2-3 for the average elevator with occupants facing the walls rather than forward.

Avoid touching a potentially contaminated surface by using something to push the buttons. (Corsi uses a paper towel.) Don’t lean against or touch elevator walls.

Masks block large droplets coming out of an infector’s mouth. They don’t work as well on the small, potentially most infectious droplets—Corsi estimates most masks stop 20-30 percent—but they do change the droplets’ fluid dynamics. “They’re still in the air, but they’re not directly aimed at you,” he says.