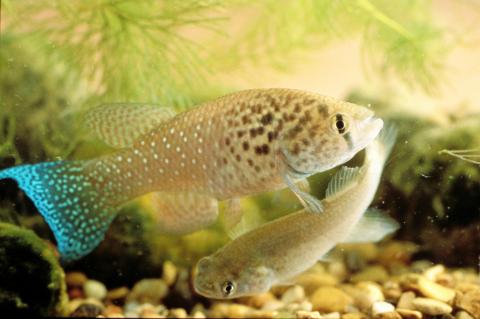 New research from Portland State University finds vitamin D, or a lack thereof can trigger or suspend embryonic development in a species of fish. The study also provides evidence suggesting the vitamin is critical to the early development of vertebrates generally.

The annual killifish Austrofundulus limnaeus lives its entire life in seasonal ponds that fill when the rain falls and then evaporate. To survive in these uncertain environmental conditions, the fish evolved to produce embryos that respond to environmental cues by developing along two distinct trajectories. In one, the embryos grow to maturity. In the other, the embryos enter multiple states of dormancy during which all development halts, allowing embryos to survive for months encased in drying mud without oxygen or water.

Researchers at Portland State University wanted to know what regulated dormancy in embryos of A. limnaeus and what mechanisms provide for the integration of environmental cures into its developmental program. To answer that question the research team simulated varying environmental conditions by incubating embryos of the annual killifish at different temperatures to induce the two developmental trajectories. They then analyzed the fishes’ RNA during separate developmental stages, searching for a gene that’s expression triggered development along each trajectory.

What the researchers found was unexpected. Results of the analysis showed that, when active, vitamin D synthesis and signaling promotes normal development of the annual killifish under environmental conditions that favor dormancy. Conversely, inhibiting the pathway resulted in killifish following the dormancy trajectory under conditions favoring normal development. The research team was also able to induce dormancy in the embryos of zebrafish, a species that does not suspend embryonic development, by blocking the vitamin D synthesis, which suggests that the vitamin is critical to vertebrate development. The researchers also point to similar receptors that regulate dormancy in species of roundworms and fruit flies, which indicates that the vitamin D receptor’s function has been conserved across a range of species throughout a long evolutional history.

“This is a newly discovered role for vitamin D,” said Amie Romney, a postdoc at the University of California, Davis’s School of Veterinary Medicine, Anatomy, Physiology, and Cell Biology, and the lead author of the study, which was recently published in PNAS Latest Articles. “What we’re seeing is that vitamin D isn’t just essential for the regulation of calcium, it plays an important role in critical life history transitions and may help us better understand the clock that regulated the life cycle.”

According to Jason Podrabsky, a professor of biology at Portland State and the study’s principal investigator, the research team’s discovery could lead to a better understanding of dormancy and the mechanisms that control it, which has implications in human health as well. Knowledge of the systems that control extreme physiological states such as dormancy could improve understanding of what’s happening at a molecular level when someone experiences extreme cold shock or medical conditions such as a heart attack or stroke. Furthermore, the ability to induce dormancy in a species of fish that do not arrest development could be the first step in developing techniques to induce dormancy in other species, including humans, something that was once considered impossible outside the realm of science fiction.

This research was supported by a grant from the National Science Foundation, award number: 0344578