A group of Portland State University students recently returned from a five-day oceanographic research expedition off the coast of Oregon with more than 175 specimens collected from the deep sea and an experience that few undergraduate students will ever have. 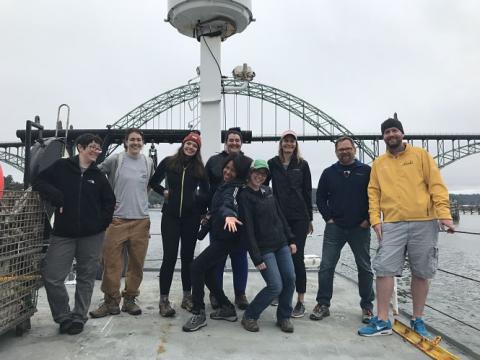 To prepare for the expedition, the undergraduate students had enrolled in advanced spring and summer coursework.

"It was an opportunity to not only show the students animals that few have ever seen, but also teach them about how we do research at sea because that part of marine science is so expensive and rare." Lindgren said. "They're all interested in pursing graduate school so this was an opportunity to literally throw them in the deep end and see how they liked it."

The group explored the deep waters off the coast of Oregon and sampled what's called the oxygen-minimum zone or "dead zone," a phenomenon caused when plankton at the surface — the tiny plants and animals at the foundation of the ocean food web — die and sink toward the bottom of the ocean, where they are decomposed by bacteria that deplete the water of oxygen. While some animals die from the lack of oxygen, others thrive — and it's those that Lindgren wanted to study.

"We were really interested in looking at both the biodiversity — what we can find there — and the physiology — how these animals survive in low oxygen," she said. "We have changing oceans where there's more low-oxygen water coming close to estuaries and fisheries. If we can understand how some animals live in oxygen-minimum zones, that might help us predict and better prepare for when we have less oxygen in the ocean."

The student-scientists deployed and recovered all the research equipment — from the 100-foot trawling net to a conductivity-temperature-depth tool that is used to measure water chemistry — as well as collected, identified and sorted upwards of 175 fish, squid and other specimens that biology classes will now be able to use.

"I can't take all the students I’d like to out so it's nice to take a few students out but try to maximize the impact of what we collect," Lindgren said. 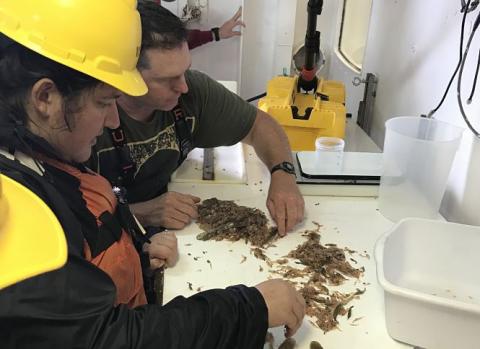 The group made some surprising and rare finds, among them a vampire squid and a female anglerfish with a small parasitic male attached to it. Lindgren explained that in some species of anglerfish, the males are much smaller than females and once he finds a suitable mate, he latches on until his body permanently fuses with hers, living off her blood supply.

"To be able to show the students this novel reproductive behavior in real time is such a fantastic opportunity," she said. "Very little is known about the deep oceans of the world, and yet, they contain some of the coolest animals on the planet."

A sample of the specimens that were collected will be on display during PSU's Museum of Natural History's fall open house. The event is Saturday, Oct. 20 from noon to 3 p.m. in the lobby of the Science Research and Technology Center.

The group's ocean water data also proved useful to the Oregon Department of Fish and Wildlife after a larger-than-normal amount of crab had washed ashore dead while the vessel was out at sea.

"There were no other boats taking water chemistry measurements at the time we were out, so it was great that we could provide ODFW with access to our data because they could look at that and say, 'Well, the oxygen dropped in areas where the crabs live so that likely contributed to this die-off,'" Lindgren said.