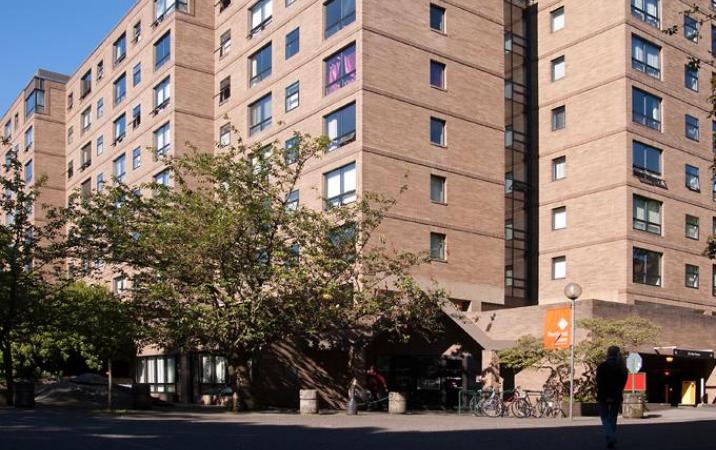 Joseph C. Blumel Residence Hall (known as Blumel) is a nine-story, L-shaped, student residence with two parking levels surrounding the Saint Helens Building. It is located along SW Mill Street and 11th Avenue between Mill, 11th, Montgomery, and 12th. Parking Structure 3 is located to its west, Science Research & Teaching Center to its east, and King Albert and Stephen Epler residence halls to its south. The building was designed by Michael & Lakeman and built for PSU and constructed in two phases between 1986-1988

Blumel Hall consists of furnished, one-bedroom units for non-first year students and offers housing year-round. Amenities include full kitchens (stove/oven and refrigerator), private bathroom (most have shower/tub combo), carpet floors, ground floor lounge, and parking. The building includes two-levels of parking over half of which is reserved for student residents.

Blumel Residence Hall is named after the fourth president of PSU, Joseph Carlton Blumel (1928-2007). During his long career at Portland State, Blumel served as a faculty member teaching economics, head of the economics department, dean of undergraduate students, dean of faculty, vice president for Academic Affairs, and the university's longest serving president (1974-1986). One of the many accomplishments of Blumel's presidency was the establishment of four professional schools: College of Engineering, College of Urban and Public Affairs, School of Fine and Performing Arts, and the School of Health and Human Performance (dissolved in 1992 due to financial exigency).