On a basic research level, we aim to understand how organisms (specifically fish) adjust or adapt their life history, behavior, physiology, biochemistry, and molecular biology in order to thrive in marginal or extreme environments.  We use an integrative approach to our research that spans from ecology through organismal physiology and behavior to genomics (exploring the DNA sequence), epigenetics, transcriptomics (the part of the genome that is expressed at any given time), and metabolomics (the small molecules and metabolic intermediates that are present or active at any given time).

We hope to apply our knowledge to improve the human condition.  We believe that nature, through evolution, has already solved many problems that cause or contribute to human diseases. By studying organisms that have evolved to survive in conditions that challenge human physiology or cause damage to human tissues, we can better understand how to treat or prevent these diseases in humans. 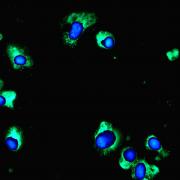 Mitochondrial metabolism during development and dormancy

Sequencing the genome of A. limnaeus using next-generation sequencing techniques

The effects of hypoxia on developmental physiology

Techniques Commonly Used in Our Research

You can find us in the Science and Research Teaching Center.