Portland State University’s 2020 virtual commencement was the first of its kind. Nestled within that unique celebration was another first: the first cohort of Career and Community Studies program graduated with an undergraduate certificate.

The program was launched in 2016 funded by a 5-year federal grant designed to create pathways for people with disabilities.

Mary Morningstar, co-director of the Career and Community Studies program, said the program’s focus is on providing access to a typical post-secondary education experience for students with intellectual disabilities who are traditionally left behind. 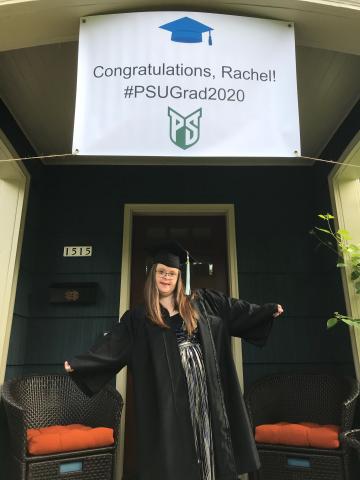 Rachel Esteve was one of five students to graduate on June 14 from the program. Esteve is the first student with Down syndrome to graduate from PSU with a four-year certificate. She’s joined by Lucy Balthazaar, Wyatt Isaacs, William Larson and Sawyer Viola.

Esteve said she was inspired to attend college after seeing her sister go through the same process. She’s looking forward to finding a career in child care and continuing to build on her independence.

“I’m really into kids because when I was at school I did a volunteer job working with kids at a daycare center called Little Vikings. I really enjoyed playing with the kids,” she said.

Rachel’s father, Harry Esteve, said they were skeptical at first that a four-year program would be the best fit. But it’s clear now the program was the right choice.

“We never in a million years would have expected that she would end up having a four-year university experience. It just was not in the cards,” he said. “But this program came about and because of it, she's a better writer, she's a more critical thinker and she's more independent.”

The Career and Community Studies program is designed with three pillars in mind: academics, establishing a career path and social inclusion.

Students take classes aligned with their career interests and are encouraged to participate in campus life. Morningstar said students have taken on leadership roles in different clubs and activities on campus and thrive thanks to the experience.

“They’re then exiting the program with a certificate from PSU and experiences and academics to pursue their adult life,” she said.

The program has 18 students at the moment — five of whom just graduated — and will admit five or six new freshmen for the upcoming fall term.

Balthazaar is planning to use her certificate to find a career working with people in a guest services role or possibly as a paraprofessional.

“It really helped me working with other people and getting a job,” she said of the program. “It was very meaningful having a job experience and going to college and being included in campus life.”

Balthazaar said she’s dreamed of attending college ever since her friends graduated high school and followed the same path. She still has her letter of acceptance from 2016 and is incredibly proud of her accomplishment.

“I’m very proud, other people have assumptions that we can't go to college,” Balthazaar added.  “And I think we need to make it clear that we are not less, we can go to college and we are beautiful people.”