Bit by bit, students in a medieval history class began piecing together the story of a 15th-century codex and its journey to Portland State’s library. They didn’t get to touch the pigskin-leather binding or carefully turn its stiff, stained pages as they had hoped when they registered for the course, but thanks to digital scans, they were still able to take a deep dive from a distance, from deciphering scribblings in the margins to tracing watermarks back to specific paper mills.

“History is more than opening a book and reading,” said John Ott, professor and chair of history who first reached out to the library’s Special Collections about acquiring the work. “History also resides in objects like our codex. Examining its production and use permits students to see its material complexity and experience the thrill that comes with getting a sense for how an early book moved through the world.”

The codex binds together two separate texts printed in 1490: the Fasciculus temporum (“Little Bundles of Time”) by Werner Rolewinck, a widely read history of the world from creation to Pope Sixtus IV (1471-1484), and a second edition of the Malleus Maleficarum (“The Hammer of Witches”), an infamous witch-hunter’s manual used by inquisitors to identify witches, convict them of witchcraft and execute them for their alleged crimes. Ott wagered students would be drawn to this.

We want this to be a place where PSU students get to do deep, original and hands-on research and engage with the materials.

An endowment for Special Collections set up by a history alumnus, the late A. Gordon Hunter ’59, provided the funds to acquire the book from a Parisian rare-book dealer two years ago, building upon the library’s already significant medieval teaching collection.

“We’re not a vault; we’re not here to acquire it and lock it away,” said Cristine Paschild, head of Special Collections and university archivist. “We want this to be a place where PSU students get to do deep, original and hands-on research and engage with the materials.”

While a remote spring term prevented the students from having the sensory experience they would have liked, Special Collections technician Carolee Harrison walked students through the book’s unique features with a video show-and-tell and scanned dozens of pages for them to examine online. Students used these materials to pursue individual research projects. “As our term continued, we put more information together,” said Christian Graham ’20. “And we started to see the bigger picture of this book emerge.” 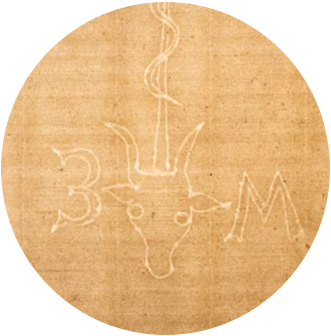 Watermarks, visible when light shines through a page, identify the maker of the paper, and sometimes where and when the paper was made. In the Fasciculus temporum, there are five distinct watermarks: a letter “P” topped by a small trefoil or quatrefoil, a second letter “P” with a trefoil and hashmark, a bull’s head, a round daisy or primrose with six petals, and a circle-and-line mark. The “P,” the daisy and the circular mark also appear in the Malleus maleficarum, as do variations of a shield watermark. Christian Graham ’20, who researched the watermarks and paper trade within medieval Europe, traced the “P” watermark to the press of Matthias Van der Goes in what is now Antwerp, Belgium. The watermark dates back to the years 1489-1491. 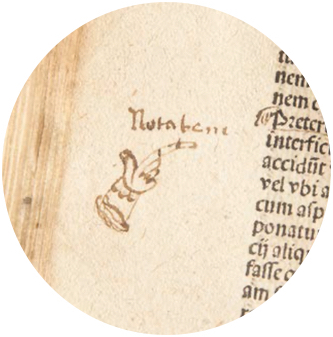 Ott says notes in the margins made by at least three separate hands give us a sense for how the texts were read and used. These ranged from a paragraph symbol (¶) to underlined words and squiggly markings, or nota bene marks, used to draw readers’ attention to details (see inset). On one page in the Fasciculus temporum, there was also a handwritten notation: “Rex” (Latin for king) and the names of two kings of the Kingdom of Judah, Jehoshaphat and Josiah. Undergraduate student Jeremy Maly drew on his Latin skills to provide the class rough translations. At least one of the book owners is believed to have been the monastery of St. Nabor, near Metz in modern France, since an ex-libris bearing the name of the monastery is on the title page. 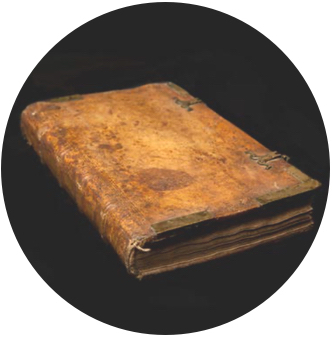 The Fasciculus temporum in PSU’s codex was printed by Johann Prüss in Strassburg (now Strasbourg, France) and the Malleus maleficarum was printed by Peter Drach in Speyer. At some point shortly after printing, the two texts were bound together in pigskin with brass clasps (see inset). Master’s student Zachary Hamilla found a missal listed as published in Strassburg by “Johann Prüss for Peter Drach” around 1490, the same year that Drach published the Malleus, and another master’s student, Andy Swinford, found evidence of a second codex in which the same two texts were bound together. This suggests that they were printed and sold as a pair. While it wasn’t rare for printers to cooperate on publishing ventures, these findings point toward a heretofore unremarked collaboration between Drach and Prüss. 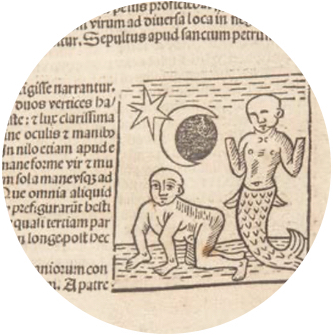 The Fasciculus temporum was illustrated with a number of woodcuts—some of cities, some of  catastrophes like cities on fire, some of marvels such as birth abnormalities. One illustration shows physical deformities occurring in conjunction with a solar or lunar eclipse (see inset), which Harrison said is interesting, given that this edition was bound with a text dealing with witchcraft. “In this society, you have prevalent thinking that an eclipse could cause human deformity,” she said. “This is the thinking that’s going on at the same time that people are thinking that witches have the power to control whether or not crops thrive, whether the weather is fair, or whether a person lives or dies.”